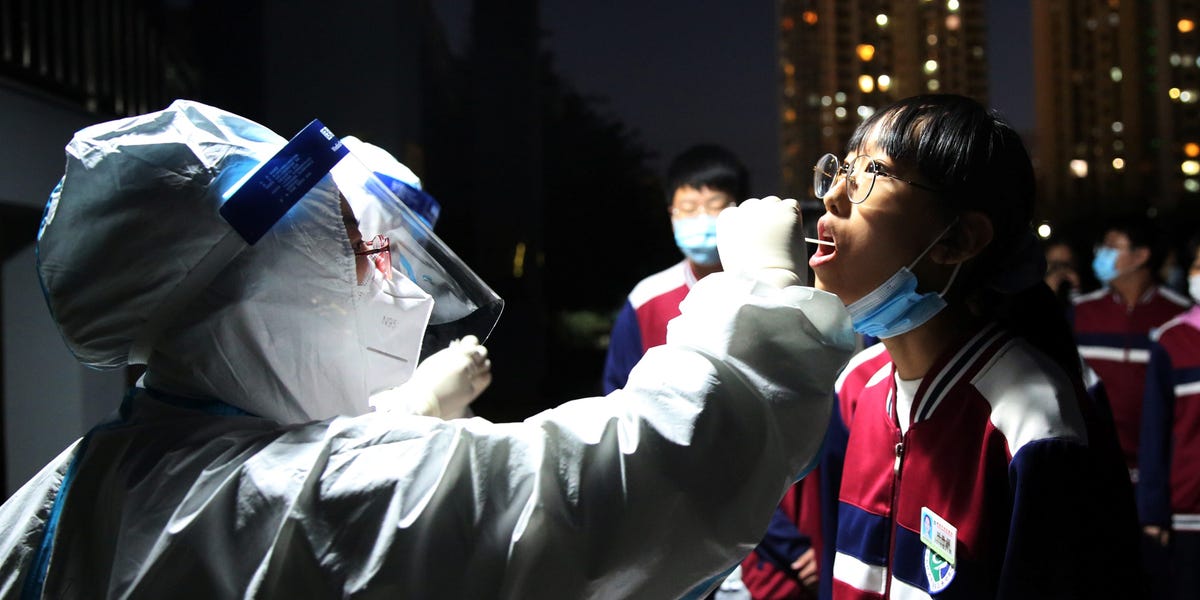 A Chinese city says it has tested 3 million people for COVID-19 in just 48 hours, the latest example of just how far the US and much of Europe lag behind in terms of testing capability.

On Sunday, the eastern city of Qingdao announced it would test all 9 million residents after identifying 12 cases of coronavirus linked to a local hospital. Officials said everyone would be tested within five days.

In a Tuesday update, the Municipal Health Commission of Qingdao said none of the 1.1 million tests that had returned so far were positive, according to the Associated Press.

However, China’s National Health Commission said Tuesday that there were six new cases of the virus in Qingdao recorded in the past 24 hours, according to the AP. The reason for the discrepancy is not clear so far.

China effectively rid itself of the coronavirus in August, having recorded its first day without a new locally transmitted case on May 23.

The news from Qingdao after a dozen new cases shows just how seriously the country is still taking the virus.

Testing 3 million people in 48 hours is a feat that would be unheard of in cities across Europe and North America.

Many authorities in US cities, who struggled to roll out comprehensive testing programs during the worst weeks of the outbreak in July, are still failing to do so in the face of another surge in cases this autumn and winter.

“One of the biggest obstacles to containment has been the fact that we don’t have a testing strategy and people don’t know their status,” Dr. Amesh Adalja, a senior scholar at the Johns Hopkins University Center for Health Security, told Business Insider in August.

“When you look at countries that have been able to contain [the virus], they didn’t do anything out of the ordinary. They tested, traced, and isolated.”

Dr. Carolyn Cannuscio, a social epidemiologist who leads the contact-tracing program at the University of Pennsylvania, also told Business Insider: “We have a broken testing system, and that sets us up for failure in contact tracing because people are waiting so long to get their test results that we have missed a critical period for counseling those people to stay home and avoid infecting others.”

At one point in May the US was testing more people than any other country, but it still lagged far behind Europe in terms of testing per capita.

The UK, too, has struggled to meet testing targets, and has made fruitless attempts to stamp out flare-ups in areas in the north of the country.

In early September, the UK government website that allowed people to book coronavirus tests crashed, saying no tests were available.

China has once before tested a whole city after recording just a handful of new cases.

All 11 million residents of Wuhan — where the outbreak began in December 2019 and which was locked down for 76 days in early 2020 — were tested over a 10-day period in May.

As of Monday evening, China has recorded 85,591 cases of COVID-19 and 4,634 deaths, according to the country’s National Health Commission.

In comparison, as of Tuesday morning, the US has recorded more than 7.8 million confirmed cases of COVID-19 and 215,086 deaths, according to a tracker from Johns Hopkins University.

President Donald Trump announced he had tested positive for COVID-19 on October 2. Since then he has returned to the campaign trail and claimed that he is “immune” to the coronavirus, even though there are no indicators that could reliably determine this.