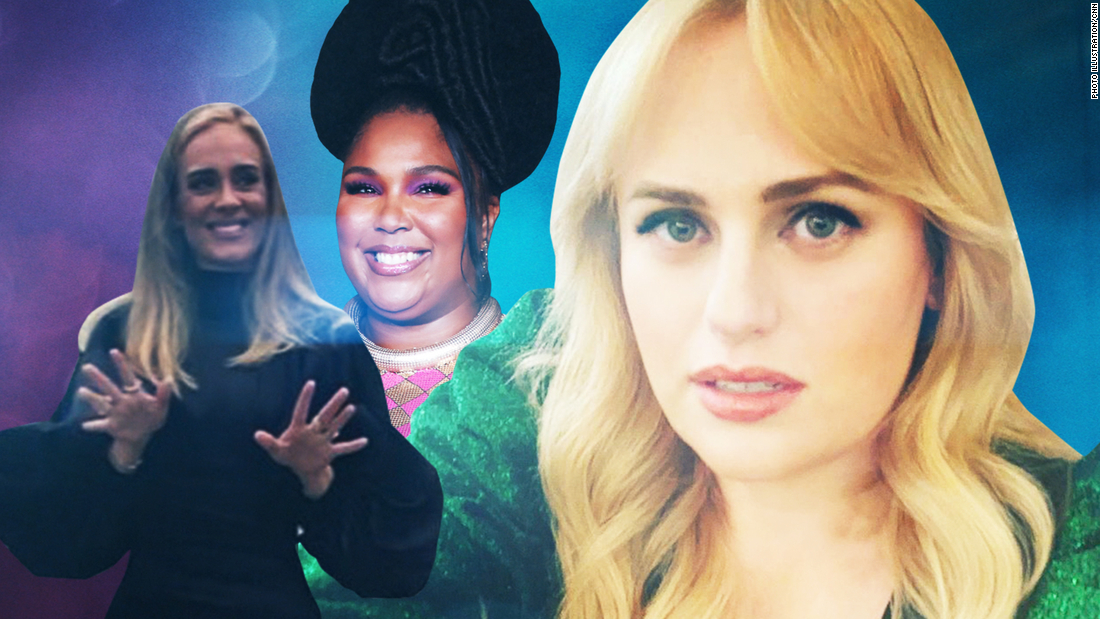 Women in the spotlight who willingly share their experiences with weight loss are often unfairly critiqued for feeding into a narrative that “thin is better,” while others who embrace their curves are labeled “unhealthy.”

Rebel Wilson dubbed 2020 her “Year of Health” back in January, and she’s been proudly posting about her efforts ever since.
I wrote about Wilson celebrating her fit physique this week and drew immediate ire from some who felt the coverage suggested there is something wrong with being bigger.

While I understand the concerns, nuance, apparently, doesn’t come easy to the internet.

Passing judgment on stars who lose weight (or gain weight) is an unfortunate pastime we can’t seem to quit. Here are just a few celebs who have been through it.

Adele: Her recent physical transformation sparked claps, eyerolls and complaints that she is now “too thin.”

The criticism when she first found fame was that she was too big. Either way, she’s beautiful, talented and an artist who is easy to admire.
Melissa McCarthy: The former “Gilmore Girls” star used her experience being zaftig to launch a plus-size clothing line years ago. I remember when she first started shedding pounds, someone on Twitter questioned if she’d still be as funny as a thinner woman. Ridiculous.

Lizzo: The singer fully embraces her fullness, and that has led many people to sign her up as the poster woman for big-girl acceptance.

But hailing Lizzo just for her body positivity ignores the reality that she would be a success at any size.

Zac Efron: Women aren’t the only ones who have to deal with comments about their bodies.

To some, the actor is looking slightly different on his Netflix travel series, “Down to Earth with Zac Efron.” He was deemed, by some, as now having “a dad bod.”
Ben Affleck: New Yorker magazine published a piece in 2018 titled “The Great Sadness of Ben Affleck,” in which the actor was described as having a gut “pooching outward.” Ouch.
I could keep going, but let’s get back to Wilson. By documenting her weight loss, Wilson was proudly opening up about one of the most difficult challenges a person can take on (I know this for a fact). I see no reason why such positivity shouldn’t be shared, if not amplified.

Lizzo takes no less pride in showing off her full figure — this is a woman who posed nude for her album cover, after all — and that, too, is cause for recognition, positive reinforcement and discussion.

Conversations around celebrity body image on social platforms can range from laudatory to cruel.

There is a difference between judgment of these bodies and acknowledgment of them. When I cover this topic as a journalist, it is with compassion and the hope we may see our own self-image struggles and successes in the experiences of celebrities who choose to share them.

And whether it’s a public journey like Wilson’s or a quiet transformation like Adele’s, personal fitness is ultimately a personal choice.

So, let’s all stop standing on each other’s scales.

I’ve only watched the trailer, and I’m already hooked on “Deaf U.”

In this Netflix reality series, “a tight-knit group of deaf students share their stories and explore the perks and pitfalls of life at Gallaudet University,” according to the streamer.

Based on the trailer, it appears some of the “perks and pitfalls” involve hookups at the private university for the deaf and hard of hearing in Washington, DC.

Nyle DiMarco, a deaf activist and winner of both “America’s Next Top Model” and “Dancing With the Stars,” is working with the show as executive producer and shared a tease of it on Instagram.

Hear ye, hear ye: I love a good historical drama. A while back, I binged the first season of “The Spanish Princess” on Starz, which is based on a novel by one of my faves, British author Philippa Gregory.

I never get tired of Tudor history, and I thoroughly enjoyed the dramatization of Henry VIII and Catherine of Aragon’s love affair.

Season two arrives Sunday. This time around, according to Starz, “Catherine’s struggle to produce an heir places her marriage and position in the court at risk, and she is haunted by her choices from the past.”

Speaking of love stories, my colleague Brian Lowry had good things to say about this anthology series centered on a test that helps people find THE ONE.
“Set in the near future, the development of ‘the test’ instantly raises a host of questions, explored over the course of the six-episode run: What if you were with someone when such a test became available, and they’re not your ideal match?” Lowry wrote in his review. “What if your soulmate exposes a side of you that you didn’t recognize, or fully understand? What if your soulmate dies?”

It all sounds like a recipe for something I’d want to watch.

“Soulmates” premiered Monday on AMC and is available on demand.

If that’s not enough for you, check out some more options here.

Two things to listen to:

You wouldn’t think that Bon Jovi would give us an album named after one of the most tumultuous years ever, but here we are.

Jon Bon Jovi said during an interview on “The Late Show With Stephen Colbert” that the band’s new “2020” title was “tongue-in-cheek” when he came up with it in 2019.

“As the songwriting continued, I realized there were so many things going on that were topical,” Bon Jovi said. “So, that title took on a much different meaning.”

The result is a project that references the pandemic and the Black Lives Matter movement, among other topics. The Covid-19 crisis, in particular, hit close to home as Bon Jovi said two of the members of his band contracted the virus and are just now getting back to where they can sing at full strength.

John Lennon would have turned 80 years old on October 9, and a new album marks the occasion.

“John Lennon, Gimme Some Truth. The Ultimate Mixes” is being billed as “his most vital and best loved solo recordings (that) have been completely remixed from scratch for a new collection.”

There are other celebrations paying tribute to Lennon, who was shot and killed in New York City on December 8, 1980.

His two sons, Sean and Julian, are participating in a two-part documentary that also includes Paul McCartney and Elton John, BBC Radio 2 announced.

One thing to talk about:

Add movie theaters to the list of things I miss most during the pandemic.

It’s not as high up as say, my family, friends and hugs, but it’s definitely in the top five.

So, I winced with the news that Regal Cinemas would be shutting down until further notice across the US beginning Thursday.
My cell phone contains a list of the movies I was looking forward to in 2020: “Wonder Woman 1984,” “No Time to Die,” “Antebellum,” “Coming to America 2” and several others that have either been postponed or gone straight to streaming. Much like the concerts I had planned on attending, these movies marked a chance to get together with friends to chill out and enjoy some downtime.

I absolutely understand the need to keep safe (I haven’t visited a theater since the pandemic started), but the theater experience can be hard to replicate. There’s just something magical about it.

Hollywood has always been a place of magic, and I pray some of that finds a way to get us all back safely before the big screen.

I promise to never again take the experience for granted.

Something to sip on

As the year continues its tragic march, the loss of Eddie Van Halen has added to the sadness.

Whether you are a Van Halen fan or not, many people knew the guitarist for his exemplary musical skills, and his death at 65 after battling cancer hits hard.

In many ways, the 1980s would not have been what they were had it not been for his group, Van Halen. Despite internal dramas (you can Google it), the band still gave us some memorable hits including “Jump” and “Panama.”

As my colleagues Giulia Heyward and Saeed Ahmed wrote, Van Halen had achievements that some may not even be aware of.
Most of us didn’t know him personally, but that doesn’t lessen our grief over one of the greatest to ever pick up a guitar.
There has been way too much death this year. But when we lose members of the music world like Van Halen and “I Can See Clearly Now” singer Johnny Nash, who also died this week at the age of 80, it can feel like their music has gone silent.

Fortunately for us, this is not the case, as they have left us with their art to both remember them by and use as part of our healing.

Pop back here next Thursday for all the latest entertainment happenings that matter.