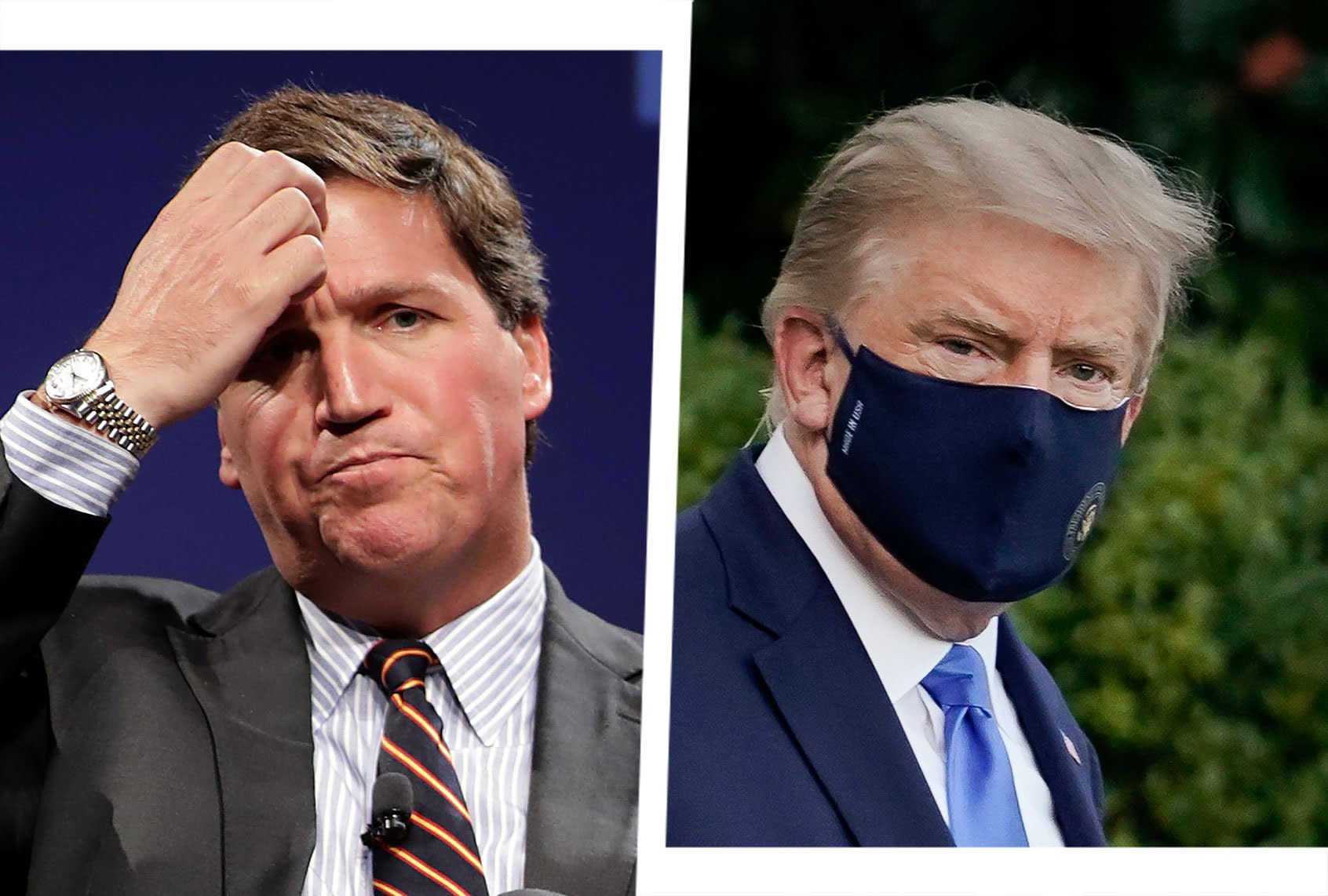 Donald Trump’s appearance on Tucker Carlson’s Fox News show, less than a week since the president returned from being hospitalized for COVID-19, revealed very little about Trump’s health or infectiousness. Yet unintentionally,  the president seems to have dropped some clues about the seriousness of his condition during the rambling, tangent-ridden interview.

The interview on “Tucker Carlson Tonight” was conducted by Dr. Marc Siegel, a Fox News contributor who has defended Trump’s poor handling of the American coronavirus outbreak, compared the pandemic to the flu and in 2016 raised concerns about the neurological health of then-Democratic nominee Hillary Clinton despite never having examined her in person.

Carlson set a hagiographic tone for the segment at the beginning, describing Trump’s supposed “remarkable turnaround” before allowing Siegel to conduct the interview. The two were not in the same room: Siegel was in a studio and Trump was in the White House, being filmed separately. Trump and Siegel’s conversation wandered, from Trump blaming China for the virus and repeatedly mentioning Regeneron (a company that gave him an experimental drug and with which he has personal ties) to describing himself as “very strong,” offering to donate his plasma and claiming that he has improved faster and better than others who have had COVID-19.

Despite these attempts to project that he was “virile,” Trump admitted that the disease had made him feel “tired,” adding that “my life is based a little bit on energy and I didn’t have it.” While downplaying his symptoms, however, Trump promised to freely give away the drugs that he has previously claimed constituted a “cure” for him. (Curiously, Trump has been consistently opposed to universal healthcare policies that might make such drugs free and accessible, though he was treated by the military healthcare system that has been likened to an exclusive form of universal healthcare).

Trump also stated that was “medication-free.” “I’m not taking any medications as of eight hours ago,” he claimed.

Trump also claimed that his Secret Service agents did not mind his Walter Reed hospital drive-by, which involved close physical contact with the security detail. Some current and former Secret Service agents interviewed by CNN were “frustrated” by Trump’s publicity stunt. “We’re not disposable,” one said.

Trump declined to say if he had received a test for the virus today that might definitively say if he had cleared the virus from his system. “I have been retested and I haven’t even found out numbers or anything yet …. I’m at either the bottom of the scale or free,” the president said. Based on reports of infections, the CDC recommends that those who have had COVID-19 refrain from being around others until at least 10 days since their first symptoms appeared and 24 hours since their fever waned without the use of “fever-reducing medications.”

Trump also denied experiencing any of the psychological symptoms that frequently accompany dexamethasone, the steroid that he is using to stop his immune system from destroying his infected lungs.

“The interview yielded little useful clinical information,” Dr. Georges Benjamin, executive director of the American Public Health Association (APHA) and former secretary of health in Maryland, wrote to Salon about the Siegel-Trump exchange. “The physician interviewer asked questions that were superficial and President Trump gave no specific answers.  He did admit to getting a CAT scan but we are not sure of what body part. He also said he got a lung test but no specific insight into what test. I suspect it was a breathing test since he said they told him he could keep his jacket on. He did not seem out of breath but he did not exert himself during the interview. Basically no new information.”

One expert who spoke to Salon said that, based on Trump’s self-described symptoms, there is reason for concern about whether he could infect other people.

“Based on the limited public data available, and the President’s own description of imaging results and tests tonight, we must assume that he presented to Walter Reed Hospital with a severe case of COVID-19 as defined by the Center for Disease Control,” Dr. Russell Medford, Chairman of the Center for Global Health Innovation and Global Health Crisis Coordination Center, told Salon by email. “The CDC’s own guidelines advise that patients with severe disease may be infectious for up to 20 days after symptom onset.”

He added, “To release the President earlier should require the President’s physician to provide the necessary assurances that the President is no longer infectious and to consider releasing the key medical information that supports those assurances.”

The Commission on Presidential Debates cancelled the second scheduled event between Trump and Biden earlier on Friday, after Trump refused to do a virtual debate that would prevent Trump from spreading the virus. While Biden had been willing to debate Trump virtually, the president insisted that the two men had to meet in person. Because both Biden and Trump are men in their 70s, they are at a higher risk of dying from COVID-19.