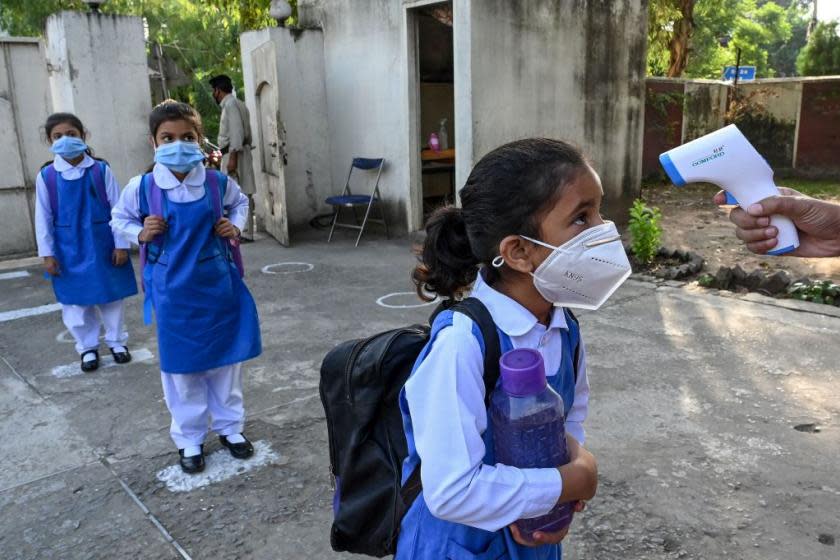 Children 17 and under contract and spread COVID-19 like adults, large new study finds

A study of 85,000 people with COVID-19 in two southern Indian states and 575,000 people they came in contact with found that children 17 and under contract and transmit the new coronavirus at rates similar to the rest of the population. Children age 5 to 17 passed the virus on to 18 percent of close contacts their same age, a team of U.S. and Indian researchers reported Wednesday in the journal Science.

These findings are particularly important given “previous reports suggesting a minor role of children in the pandemic,” Antonio Salas, a Spanish researcher who was not involved in the Indian study, told the Los Angeles Times. “National policies on how to proceed with children in schools and other social activities could change dramatically if the scientific evidence underpins the idea that children can infect as efficiently as adults, and even more, they could also behave as super-spreaders.”

The two Indian states studied, Andhra Pradesh and Tamil Nadu, have robust contract tracing and other public health programs. The other major finding from the study involved super-spreaders. While 71 percent of people infected with COVID-19 did not appear to pass the virus on to anybody else, just 8 percent of infected people accounted for 60 percent of the new infections, said lead author Ramanan Laxminarayan of the Center for Disease Dynamics, Economics, and Policy in New Delhi.

“Super-spreading events are the rule rather than the exception,” Laxminarayan said. “It has lots of implications for modeling COVID, for how to keep places safe.”

While children 17 and under were found to be more efficient disease transmitters than previously understood, they had the lowest death rate of any age cohort. Overall, deaths increased with age up to 65, then appeared to drop off. New York Times science reporter Apoorva Mandavilli said that might be because people who make it past India’s life expectancy of 69 years told tend to be wealthy, with good heath care.

More stories from theweek.com
Trump keeps claiming Biden, who has recommitted to the next 2 debates, wants to cancel the debates
Italian couple set to wed after falling in love from their balconies
Marvel casts newcomer in the role of its 1st Muslim superhero, Ms. Marvel