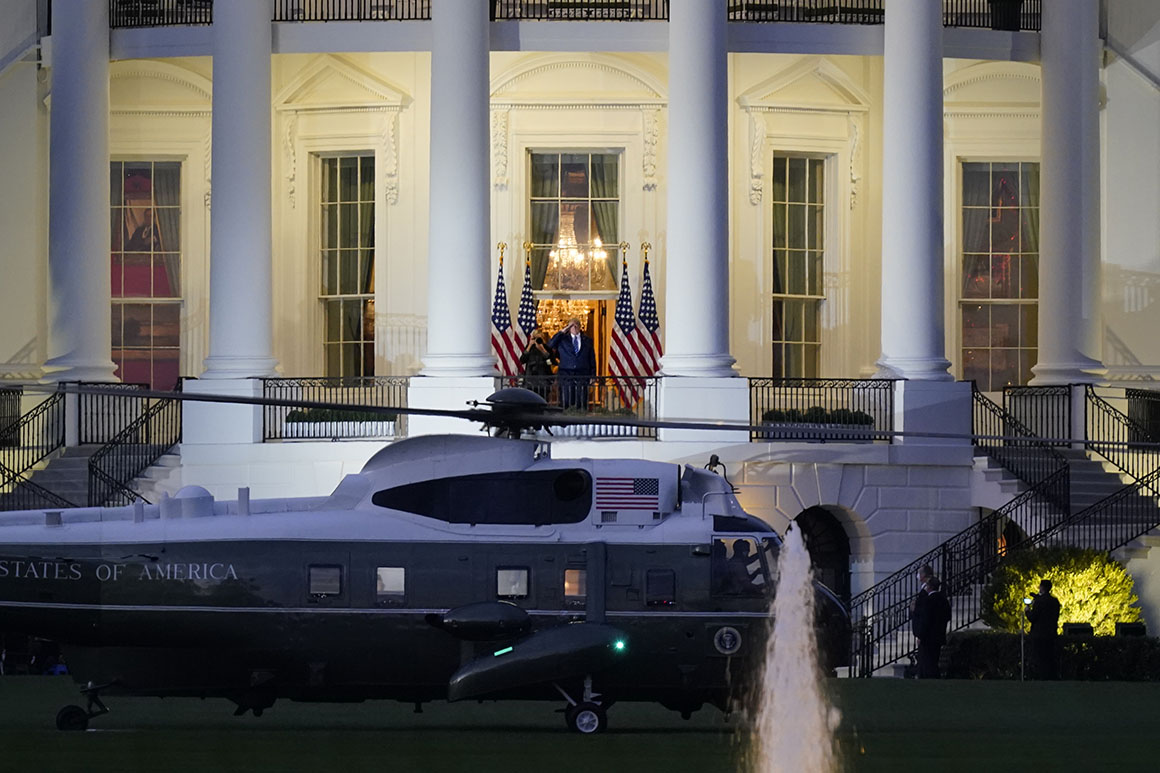 Coronavirus looms over Trump’s first day back at work

The eerie situation is just the latest reminder of the difficulty Trump has faced every time he tries to shift attention away from the coronavirus. Over the summer, he reduced discussion of the disease after the initial flood of cases receded, only to be forced to address a renewed surge of infections as states relaxed lockdown measures. And just weeks ago, his team was hoping its push to confirm a Supreme Court justice would dominate the final weeks of the presidential race. Yet days later, the administration was contending with a viral spread that has ensnared senior leaders at the White House, Trump campaign and the Pentagon.

Now, back at the White House, the president and aides are working inside ground zero of the outbreak. And the focus is back on the administration’s repeated decision to hold numerous events that flouted crowd size restrictions, mask wearing and social distancing guidelines.

“It’s surprising and yet not at all surprising,” said a former senior White House official. “They’re in such a little bubble of their own denial that they believed this is something people were making a big deal of.”

That bubble was effectively burst last week when Trump, followed by a parade of top officials, revealed they had contracted the coronavirus.

Within hours of announcing his diagnosis early Friday, Trump was moved to Walter Reed National Military Medical Center after experiencing a drop in his blood oxygen levels. Doctors started administering a variety of therapies and drugs that indicated the president had a moderate to severe case of coronavirus.

By Monday, though, Trump’s medical team said he was well enough to continue his treatment from the White House, despite ongoing questions about the true status of his health. His doctors cautioned that despite the location change, the president was still not “out of the woods.”

Regardless, Trump triumphantly walked out of the hospital that night, urged Americans not to be scared of the virus and declared himself “better” and possibly “immune.” Within hours, Trump was insisting he would soon be back on the campaign trail and vowed to debate Joe Biden, his Democratic rival for president, on Oct. 15.

To prepare for his return, the White House said it planned to have work space available for the president and his staff in the Map Room and Diplomatic Rooms, located on the ground floor next to White House physician Sean Conley’s office and clinic space.

“President Trump will continue to receive around-the-clock medical care and monitoring from his physician and a team of dedicated physicians and nurses in the White House Medical Unit who function out of a state-of-the-art clinic,” deputy press secretary Judd Deere said in a statement.

Deere noted the facilities included “many of the things a person would see in an urgent-care clinic and much more,” ensuring that Trump can both make “a full recovery,” and “continue to discharge his duties.”

On Tuesday, Trump stayed upstairs in his living quarters. Former aides say the president often prefers to work from the residence anyway. From there, he can make calls undisturbed by the usual White House traffic. Historically, Trump likes to spend time in his bedroom, making calls and watching television, while occasionally holding meetings in the Treaty Room down the hall.

While Trump is in the residence, Secret Service agents are usually positioned just outside, at the top of the stairs leading into the living quarters, said Ari Fleischer, a White House press secretary under George W. Bush. But, Fleischer noted, there are unexpected places staffers could come in close contact with the president, like the elevator that shuttles people between the ground-floor offices and the second-floor residence.

“Everyone who is in a hospital wants to leave and get home as quickly as possible,” Fleischer said. “The complication is the president’s home is staffed by many support personnel and he’s typically, if not immediately, closely surrounded at all times.”

Trump is sharing the residence with first lady Melania Trump, who is also recovering from the coronavirus. The first lady’s office on Tuesday sent out a note explaining the precautions the White House has taken to protect the roughly 100 staffers who work in the residence.

It pointed to sanitizer stations and filtration systems that had been installed during the pandemic, as well as the upgraded disinfection protocol. It also noted the residence staff has been required to wear masks since April and that anyone who comes in direct contact with the president and first lady is tested daily. Support staff gets tested every 48 hours.

“With the recent positive results of the President and First Lady, staff wear full PPE and continue to take all necessary precautions, which include updated procedures to protect against cross contamination,” the note said.

Trump’s doctor released a flimsy update on his health, while the president spread dubious information about the coronavirus — a virus that has infected more than 7.4 million Americans and killed nearly 210,000.

Still, inside the White House, people have been frustrated in recent days with the lack of communication.

“There are two primary concerns,” said a former administration official: One is “the health concern,” meaning information about who has contracted the disease; the second is “what the protocols are … so people can get tested properly.”

Within the White House, the person said, “there has been a lot of confusion and distrust around the building.”

Some feel the uneven communication extends to the White House public messaging. “There’s no sense of awareness or responsibility in terms of conveying the public health message,” said another former White House official.

“As the president has said, the cure cannot be worse than the disease,” Deere said. “This country should be open, armed with best practices, including social distancing, good hygiene and recommended facial coverings, which the White House adopted months ago, to limit the spread of Covid-19.”

Yet David Eisenman, a public health professor at the University of California, Los Angeles, said Trump — and any other asymptomatic yet contagious staffers — were potentially putting aides in a situation that is “symbolic of the entire trajectory of this pandemic.”

Nancy Cook contributed to this report.