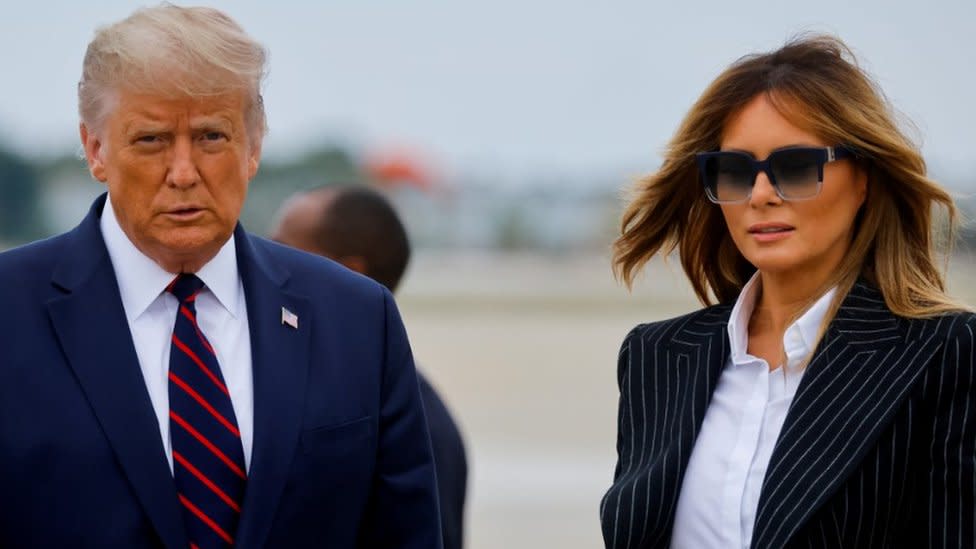 US President Donald Trump has said he and First Lady Melania Trump have tested positive for coronavirus and are now in quarantine.

Mr Trump, aged 74 and therefore in a high-risk group, wrote on Twitter: “We will get through this together.”

It comes after Hope Hicks, one of his closest aides, tested positive.

Mr Trump’s announcement comes just over a month before the presidential elections on 3 November where he faces Democratic challenger Joe Biden.

Ms Hicks, 31, travelled with Mr Trump on Air Force One to the first presidential TV debate with Mr Biden in Ohio on Tuesday. Some of Mr Trump’s family members who attended the debate were seen not wearing masks.

Tonight, @FLOTUS and I tested positive for COVID-19. We will begin our quarantine and recovery process immediately. We will get through this TOGETHER!

Mr Trump has mostly spurned mask-wearing and has often been pictured not socially distanced with aides or others during official engagements.

The coronavirus has infected more than 7.2 million Americans, killing more than 200,000 of them.

What do we know about Mr Trump’s health?

Mr Trump’s physician, Dr Sean Conley, released a statement late on Thursday, saying the president and the first lady were “both well at this time, and they plan to remain at home within the White House during their convalescence”.

“Rest assured I expect the president to continue carrying out his duties without disruption while recovering, and I will keep you updated on any future developments,” the statement said.

The physician provided no further details.

According to Mr Trump’s most recent physical examination earlier this year, he weighed 244lb (110.7kg). This is considered to be obese for his height of 1.9m (6.3ft).

But Dr Conley stated at the time that the president “remains healthy”. Mr Trump will also have the best medical care available.

America’s Centers for Disease Control and Prevention says a person must go in quarantine for 10 days after a positive test.

Is Mr Trump at particular risk because of his age?

It is dangerous to speculate about how the virus will affect any individual person.

There are clear risk factors – the older you are the greater the risk of a coronavirus infection becoming life-threatening.

The US Centers for Disease Control says eight out of 10 covid deaths in the country have been in the over 65s.

The virus also seems to hit men and people who are overweight harder.

But that is the big picture – a pattern seen across the whole population – it is not a way of saying this is what will happen to the US president.

The health of any two 74 year-olds can be wildly different and other medical conditions massively alter how big a threat this virus poses.

We do not yet know if Donald Trump has even developed symptoms.

Earlier on Thursday, Mr Trump said he and his wife, who is 50, were going into quarantine after Ms Hicks’s positive test.

He tweeted: “Hope Hicks, who has been working so hard without even taking a small break, has just tested positive for Covid 19. Terrible!

“The First Lady and I are waiting for our test results. In the meantime, we will begin our quarantine process!”

It is not clear how Mr Trump’s positive test will affect arrangements for the second presidential debate, which is scheduled for 15 October in Miami, Florida.

Mr Trump is not the first world leader to have tested positive. Earlier this year, British Prime Minister Boris Johnson and Brazil’s President Jair Bolsonaro were infected. They both have since recovered, although Mr Johnson had to receive regular oxygen treatment to help his breathing during hospitalisation.

What does this mean for the US election?

A week after Donald Trump told Americans not to worry about Covid-19 because “it affects virtually nobody” except the elderly and those with heart conditions, the president himself has tested positive for the virus.

It is difficult to overstate exactly how earth-shaking a development this is, just 32 days before the US elections.

The president will have to quarantine for treatment. Campaign rallies are off. The next presidential debate, in two weeks, is in question.

The recurring message from the president, that the nation is “rounding the turn” in its handling of the virus, has been undermined by his own illness.

Just two days ago, during the first debate, Trump belittled Democratic opponent Joe Biden for frequently wearing masks and not having campaign rallies that matched his own in size.

During times of national turmoil, the American public tends to rally in support of the president. It may not be enough to insulate him from the questions that follow, however.

Have there been other cases at the White House?

That same month, a member of the US Navy who was serving as one of Mr Trump’s personal valets tested positive.

But the White House said at the time that neither the president nor vice-president were affected.

The White House tests aides and anyone else who comes into contact with the president daily.