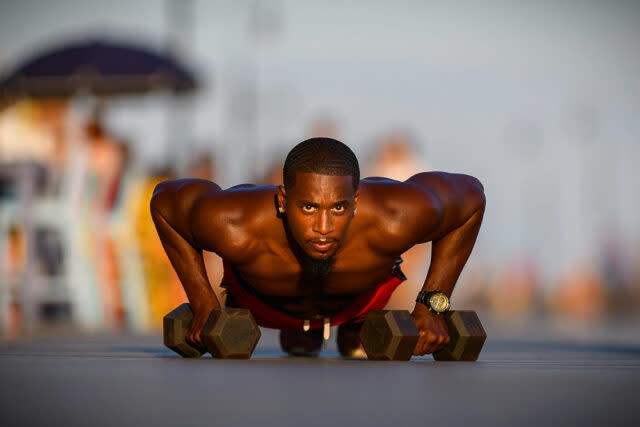 From “uber training” on park benches to workouts in the studio. Kaleb Lewis says that it takes faith and consistency to become a successful entrepreneur. Lewis started his journey training clients for six-dollars per session in public parks. He then upgraded to a church-house living room, which he remastered into his own home-gym. Knowing that he found his passion in life,  Lewis realized that he needed to expand. He volunteered his time at a middle school, leading fitness classes three times a week while also training clients early in the morning. His faith and consistency have now led him to the opportunity of starting his own business and training in the  Curtis Ray Fitness studio, where he has been helping his clients for two years now.

Kaleb Lewis has fought through adversity for the majority of his life. “90% of life is what happened to you, 10% is how you respond. Find the lesson in every experience.” Lewis said. This type of composure has helped him push through some trying times in his life. As a newborn, his home was destroyed by a fire forcing his family to move away from his New Jersey home. Then at the age of five, his father passed away. Lewis said that “The struggle of growing up in a single-parent home” is one of his biggest challenges he has faced. “I am the youngest of three, so it was a lot of stress on my mother mentally and financially,” Lewis said.

Finding a career path within fitness was a blessing in disguise for Lewis. “It wasn’t until my high school friend Michelle asked me to train her. I was clueless about training someone and didn’t  care for it either.” Lewis said. One thing that he did know was that he found personal value in working out, so he worked out a deal with his friend. She gave him gas money to go to the gym and he would return the favor by training her. “Over the span of three to four months, her body changed significantly. The light bulb actually hit me when Michelle’s cousin asked to train her as  well.” Lewis said. Recognizing this was a turning point in his life, Lewis started his entrepreneurial voyage. “I love helping people, I love fitness and I could help contribute to my  family bills.” Lewis continued, “I realized it wouldn’t be work if I turned my passion into a  career, Fitness was my way out.”

Kaleb Lewis is the CEO of EverybodyFitB LLC. He says that at EverybodyFitB they “help  women achieve their body goals through fitness.” Lewis offers personal group training and online training as well through the TeamKB fitness app. The workouts are known to be fun and intense. He provides an atmosphere that holds you accountable for achieving your fitness goals while also maintaining positive energy. In 2019, Lewis was able to achieve his goal by taking on  50 transformations. Lewis truly cares about each client that he works with, “The best part of my job is helping women feel great about themselves. Especially knowing that comparison is one of  the biggest insecurities for most women.” Lewis said. This is part of why TeamKB has been so successful in getting women the fitness results they desire.

“Being the example I didn’t have growing up.” is the biggest inspiration for Kaleb Lewis. He uses this inspiration to be a role model and make a difference in his community. Just last year,  Lewis helped distribute 2000 meals to those in need. “With the help of training clients, I started a  community organization called Feeding The City where we give out food and clothing during the  holidays.” Lewis not only is using his time for charity, but he also has another idea of how he can help people.

“It takes consistency and faith,” Lewis said. “You have to believe in yourself constantly even  when your circumstances seem unparalleled to your dream.”