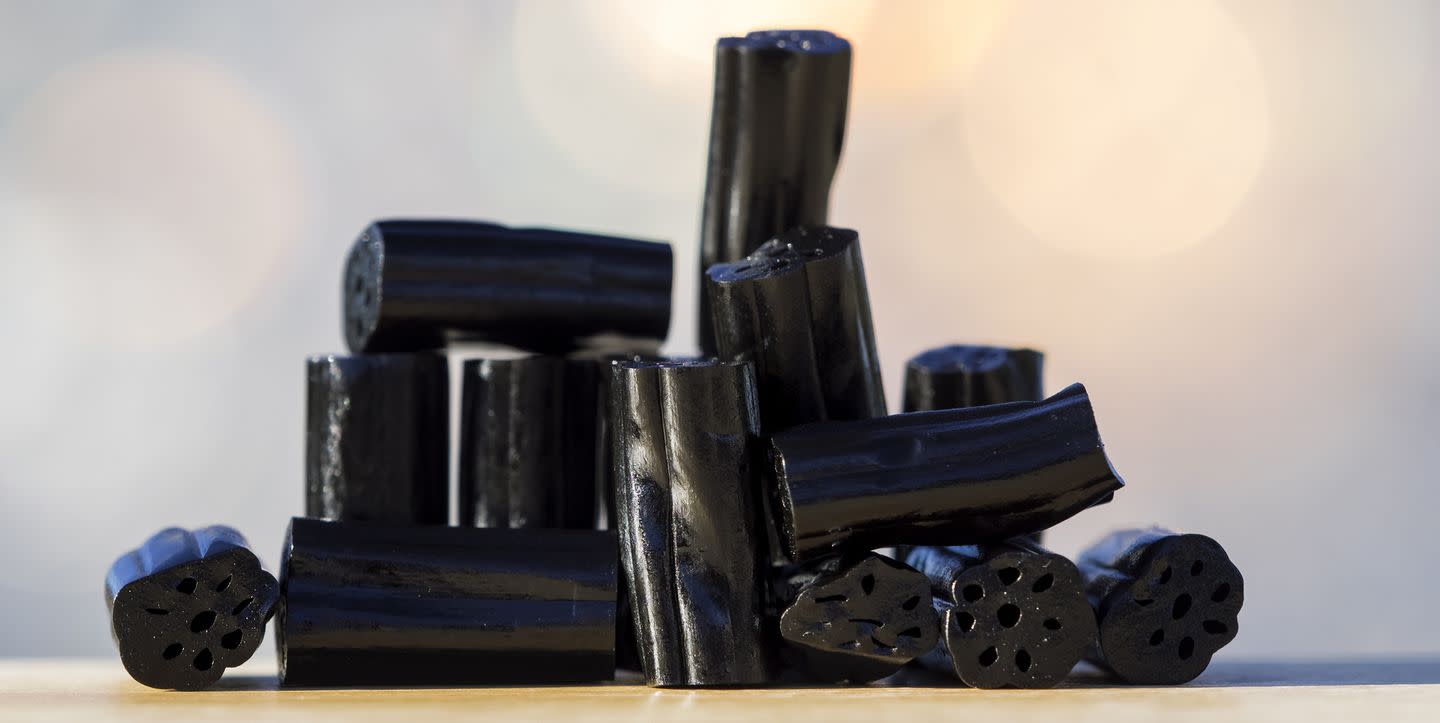 Experts Explain Why Black Licorice Could Be Bad for You

Candy lovers are facing renewed warnings about the potential side effects of black licorice as we draw closer to Halloween, as health officials react to news of a black licorice-related death. According to The New York Times, a 54-year-old Massachusetts man with no previous complications suffered critical cardiac arrest in 2019, collapsing in a McDonald’s, and later died the next day while at the hospital. Researchers and academic experts explored the curious case in a review published in the New England Journal of Medicine that determined the man’s heart failure was a result of a candy habit — he consumed one or two large bags of black licorice over the period of three weeks. And believe it or not, a certain compound found in the candy indeed deteriorated his cardiovascular health silently over that same time period.

Sophia Tolliver, MD, a family medicine physician at Ohio State University’s Wexner Medical Center, explains that researchers are particularly concerned about a plant extract found within black licorice, since the treat contains higher concentrations. “Black licorice root contains a compound known as glycyrrhizin, which is the sweet part of the root,” Dr. Tolliver says, adding that some estimate the compound to be 200 times sweeter than sugar. Glycyrrhizin and its byproduct, glycyrrhizic acid, isn’t only found in black licorice: It may be added to other food products and even medicine, Dr. Tolliver tells Good Housekeeping. But in large amounts, particularly if consumed on a frequent basis, glycyrrhizic acid can impact your bodily functions as it inhibits the production of potassium specifically.

Black licorice’s almost undetected threat to our holistic health has forced officials at the U.S. Food and Drug Administration to issue warnings on Halloweens past. In 2017, FDA officials warned Americans that eating more than two ounces of black licorice on a daily basis — for at least 2 weeks, if not longer — could lead to an irregular heart beat, known as arrhythmia, in adults over 40. The warning also states that black licorice’s influence on your health can relatedly lead to high blood pressure, inflammation, and in extreme cases, heart failure. The warning is especially careful to caution those who may already have preexisting conditions, including those who may be on medication, since certain drugs are also noted as interacting poorly with licorice itself.

How exactly does licorice and its compounds impact our health? And what happens if you eat too much? We answer your questions about black licorice below.

Why black licorice may impact your health

We know that the compounds in black licorice can work to lower the overall potassium levels in your body, but you may not be aware how crucial potassium is in the first place. “Potassium is very important in the body for a lot of different processes — and if it’s too low, it can cause dangerous cardiac arrhythmias, which could potentially lead to heart attacks, stroke, or death, in some cases,” Dr. Tolliver says. She adds that those with preexisting conditions are more impacted when potassium is low: “If you are especially vulnerable, like those in elderly populations, or if you have a history of heart issues, kidney issues, or even a noted potassium deficiency, how much black licorice you consume is something to be very aware of.”

This was especially true for the Massachusetts man, the Times reports — he ate a poor diet and was a smoker, which made a newfound love for black licorice that much more dire. Dr. Tolliver, as well as other health officials, say it’s very rare that black licorice on its own can cause serious health issues. It’s more likely that eating the sweet treat (or another item containing glycyrrhizic acid) very frequently, coupled with poor health, will impact one’s health in a similar fashion.

Compared to other candies, however, licorice might seem like a safer choice for those with a sweet tooth due to its nutritional profile: Black licorice is relatively low in sugar (around 18g in a single serving for popular brands) compared to other candies in the grocery aisle. If eaten in careful moderation, there isn’t a reason for most Americans to be afraid of black licorice: “The body, on average, tends to regulate potassium very well — for the average American, glycyrrhizin shouldn’t be a concern. It’s only if you are eating it on a more consistent basis that you’ll need to pay closer attention.”

How to safely enjoy black licorice

Dr. Tolliver says you should enjoy black licorice as sparingly as possible — it’s not meant to be an everyday snack, especially if you are eating copious amounts. The FDA points to 2 ounces a day for 14 days as problematic: But if you keep it to once or twice a week with no more than two servings (especially if you have other health issues), you shouldn’t have to worry about your potassium levels.

Since black licorice can be used as flavorings in other foods, it’s important to scan ingredient labels for “licorice root” or any mention of black licorice, Dr. Tolliver says. Some items may be flavored using anise oil, which doesn’t contain licorice root (but tastes and smells the same) and shouldn’t be a concern. Plus, licorice root that is sold as a dietary supplement often has glycyrrhizin removed and is marked “DGL” for consumers, she adds. “Anything [else] containing licorice, I would definitely err on the side of caution,” Dr. Tolliver says, “And if it doesn’t contain that ingredient, it should specifically list that it doesn’t.”

Since FDA officials also note that certain drugs, like supplements or aspirin and contraceptives, can be impacted by glycyrrhizin and licorice specifically, it’s best to discuss how black licorice may interact with your prescriptions with your healthcare provider if you’re a fan of the candy, Dr. Tolliver adds.