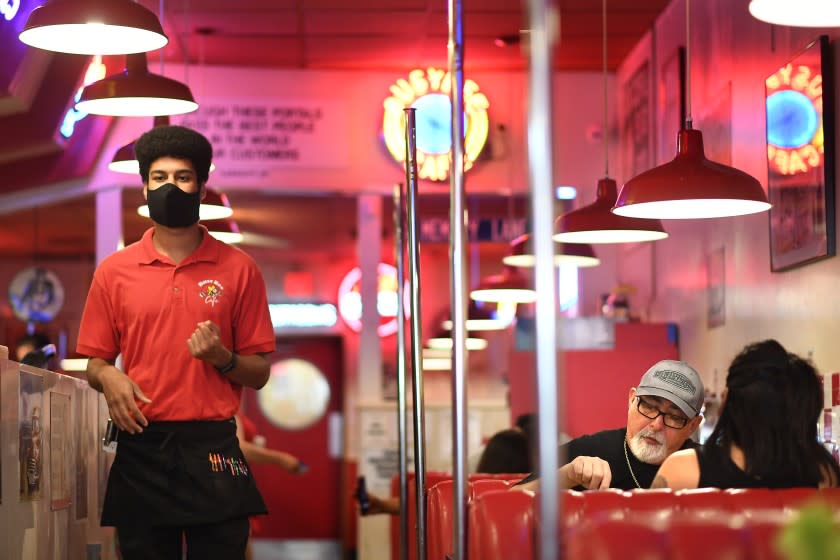 Although a handful of counties advanced in the state’s COVID-19 reopening plan Tuesday, two moved backward — the first time since California launched its tiered system that parts of the state have regressed.

Among the counties that moved forward was Ventura, the fourth in Southern California to advance on the state’s blueprint for reopening. It joined Merced and Yuba counties in advancing from Tier 1, also known as the purple tier, with widespread risk of the virus, to Tier 2, or the red tier, with substantial risk of the virus.

Ventura County officials were prepared for the move following a decrease in positivity rate and case count. The progressive step will allow the county to expand operations and capacity at business sectors, including restaurants and shopping centers, and to partially reopen other businesses, including movie theaters, for the first time.

If the county remains in the tier for two consecutive weeks, it will be allowed to open all schools. That is true for any county that moves to Tier 2.

Ventura County is currently reporting 5.5 infections per 100,000 residents and a seven-day average positivity rate of 3.0%.

Those metrics have also dipped statewide. The seven-day average for daily infections is 3,005, and the current 14-day positivity rate is 2.7%.

“Our cases have decreased from our peak over the summer, but they have been plateauing,” acting state health officer Dr. Erica Pan said Tuesday. The state’s goal is to continue to see a steady decrease in infections in order to ensure that the projected transmission rate does not rise.

In order to ensure that communities disproportionately affected by COVID-19 — including Black and Latino residents, Pacific Islanders and low-income residents — get ample attention as each county progresses, the state will examine the positivity rate of a county’s lowest quartile and compare it to the countywide metric. Both numbers would have to meet a tier’s requirements in order for the county as a whole to move forward. If the numbers fall on different tiers, the stricter guidance will stand.

Humboldt County’s health equity metric helped move it forward to Tier 4, California Health and Human Services Secretary Dr. Mark Ghaly said Tuesday. At this point, no county has been hindered from moving forward because of that metric.

In Los Angeles County, where indoor malls will reopen Wednesday for the first time in months, the positivity rate is currently low, at 2.8%. But the daily case count remains high, at 7.4 per 100,000 people — a number that has kept the county in the most restrictive Tier 1.

It’s unclear how the the health equity metric will affect L.A. County, but health officials have previously committed to expanding testing, contact tracing and educational resources in the county’s hardest-hit communities.