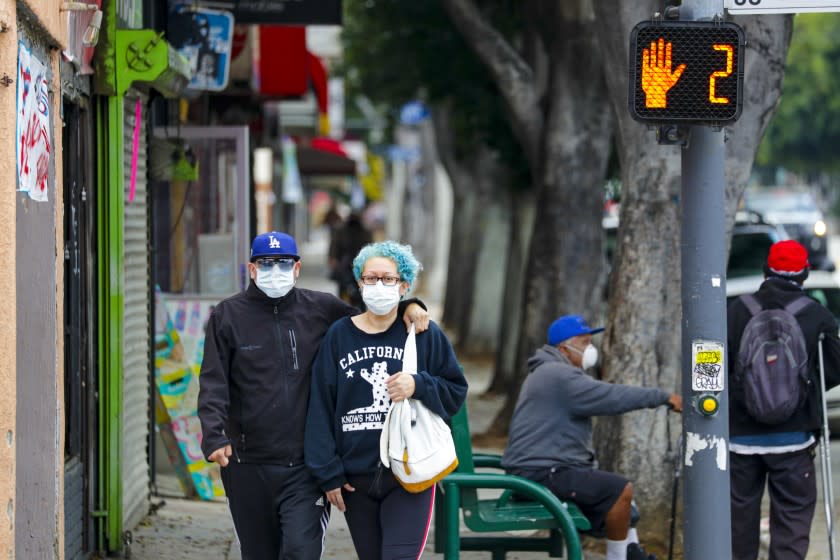 The number of new cases and deaths is usually lower on Sundays and Mondays because of laboratory reporting delays.

Officials continued to report encouraging signs of progress in the county’s fight against the virus.

There were 693 people with a confirmed case of COVID-19 in county hospitals as of Saturday, down from more than 2,200 at the peak of the crisis in mid-July.

L.A. County last week saw a slight uptick in the number of new coronavirus cases reported each day, on Wednesday reporting its highest daily count of infections since Aug. 22, but experts said it’s too early to say whether it represents the start of a larger surge in infections.

Even so, the percentage of tests that came back positive for the virus each day declined slightly over the course of the week, from a seven-day average of 3.2% Monday to 3% Sunday, officials said. The positivity rate, which helps officials determine whether more new cases are being identified because of increased transmission or because more people are being tested, has hovered around 3% for several weeks, officials said. In July, about 8% of tests were coming back positive.

The positivity rate is one of several metrics officials are keeping an eye on to gauge whether transmission of the virus is increasing and weigh whether more businesses should be allowed to reopen.

The state also recently created an equity metric that establishes specific positive case rate numbers that larger counties must meet in their poorer cities and neighborhoods.

L.A. County remains in the strictest tier of the state’s four-tier reopening system — Tier 1, or purple — because it continues to report more than 7 cases per 100,000 residents each day. That means that many nonessential businesses remain closed for indoor operations.

Officials have said they plan to proceed cautiously through the stages, directing business sectors to reopen slowly and in a staggered manner to avoid a surge in new infections that could threaten to overwhelm hospitals. Most recently, casino card rooms were permitted to resume outdoor operations Monday and indoor shopping malls were allowed to reopen at limited capacity Wednesday.