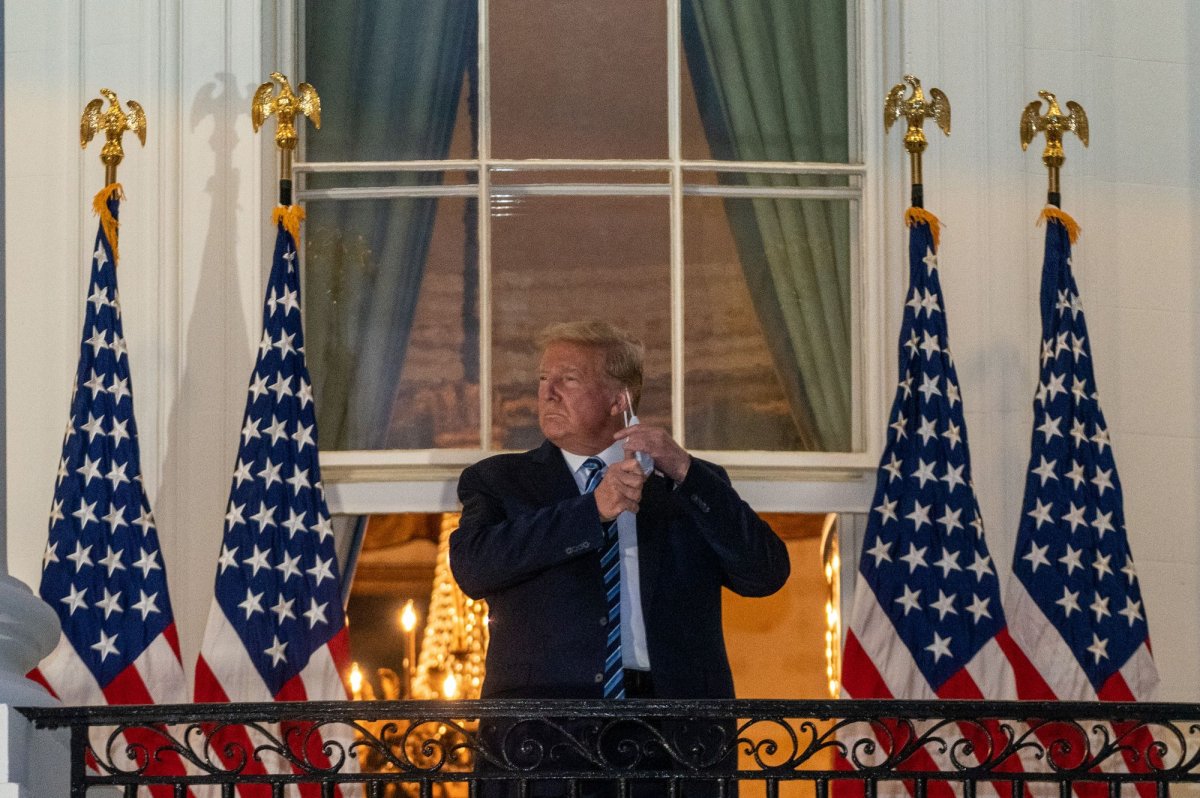 Oct. 5 (UPI) — President Donald Trump was discharged from Walter Reed National Military Medical Center and returned to the White House Monday night after being treated for COVID-19 for three days.

Trump walked out of the hospital in Bethesda, Md., at around 6:40 p.m. Monday evening, wearing a mask, while flashing a thumbs up and a balled fist to cameras before entering a motorcade for a brief drive to board a Marine One flight back to Washington, D.C.

Upon leaving the hospital, Trump ignored a reporter asking how many members of his staff had been infected and whether he was a “superspreader.”

“Thank you very much everybody,” Trump said as he walked down the hospital steps.

Before emerging from the hospital, the president tweeted that he would “be back on the campaign trail soon!”

Earlier in the day, Trump’s medical team said he had met the requirements for discharge, while his physician Dr. Sean Conley acknowledged that the president “may not entirely be out of the woods yet,” adding that the world-class team at the White House medical unit could handle his ongoing treatment.

Conley said Trump hadn’t had a fever for 72 hours and that there was no evidence of the presence of live coronavirus.

Conley deflected questions about the safety of the White House work environment, where several people have contracted the virus. He also declined to say when the president had received his last negative COVID-19 test result, citing HIPAA regulations.

Trump’s temperature was reported at 98.1 degrees Monday morning. Trump’s blood pressure was measured at 134/78 and oxygen levels were at 97% said Col. Sean Dooley, a physician at Walter Reed.

Trump will return to the White House, where he will be cared for by the on-site medical team. The team will determine when the president is no longer shedding the virus and not considered contagious, which could be “seven to 10 days,” Conley said.

“We’re in a bit of uncharted territory where we have a patient who’s received the therapies he has so early in the course,” Conley said. “If we can get through the weekend to Monday with him staying the same or improving … then we will all take that deep sigh of relief.”

Trump said in a tweet announcing his pending discharge that he was “feeling really good.”

“I will be leaving the great Walter Reed Medical Center today at 6:30 P.M.,” he tweeted. “Feeling really good! Don’t be afraid of Covid. Don’t let it dominate your life. We have developed, under the Trump Administration, some really great drugs & knowledge. I feel better than I did 20 years ago!”

The virus has killed more than 210,000 Americans and sickened more than 7.45 million people in the United States.

White House chief of staff Mark Meadows told Fox News on Monday that Trump’s health had improved overnight and that the president was ready to get back “to a normal working schedule.”

Trump made a surprise excursion Sunday evening outside the hospital, where was admitted Friday after his oxygen levels dropped. He wore a cloth mask while sitting in the back seat of an SUV and waved at cheering supporters around the hospital. At least two people were seen in the car with him.

At Monday’s press briefing, doctors said the Secret Service agents in the car with Trump were wearing full precautionary medical garb and rode in the car “for a short time.”

But some doctors criticized the trip as careless and said it flagrantly flouted precautions designed to contain the coronavirus.

“Every single person in the vehicle during that completely unnecessary presidential ‘drive-by’ just now has to be quarantined for 14 days. They might get sick. They may die. For political theater,” Walter Reed attending physician Dr. James Phillips, who is also a doctor of emergency medicine at George Washington University, tweeted.

“Commanded by Trump to put their lives at risk for theater. This is insanity.”

“That presidential SUV is not only bulletproof, but hermetically sealed against chemical attack,” he wrote in another post. “The risk of COVID-19 transmission inside is as high as it gets outside of medical procedures. The irresponsibility is astounding.”

The Washington Post reported that current and former Secret Service officials criticized the drive, as well as Trump aides.

The White House dismissed concerns about the trip, saying it had been cleared by medical staff.

“Appropriate precautions were taken in the execution of this movement to protect the president and all those supporting it, including PPE,” spokesman Judd Deere said. “The movement was cleared by the medical team as safe to do.”

Conley acknowledged this weekend that the president’s oxygen levels had dropped twice since Friday and that he’d been treated with the powerful steroid dexamethasone, which is recommended only for COVID-19 patients who need oxygen, including those on ventilators.

Administering the drug risks a systemic inflammatory response that can lead to lung injury and multisystem organ dysfunction, the National Institutes of Health warns.

Some experts have voiced concern about a premature release.

“For someone sick enough to have required remdesivir and dexamethasone, I can’t think of a situation in which a patient would be okay to leave on day three, even with the White House’s medical capacity,” University of California, San Francisco professor Robert Wachter told The Washington Post.

Doctors say COVID-19 patients remain especially vulnerable to complications for as many as 10 days after their first symptoms — and sometimes deteriorate suddenly. Trump’s age and weight place him in a high-risk category.

The prospect of Trump quickly returning to the White House was also questioned by former FDA Commissioner Dr. Scott Gottlieb, who said he was more concerned about his health after Sunday’s briefing. 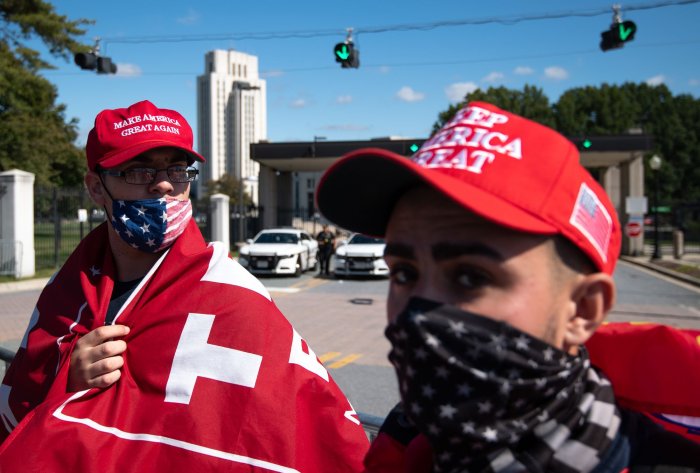 Notes and signs of well wishes are left outside the hospital. Photo by Kevin Dietsch/UPI | License Photo

The president posted several tweets Monday morning, criticizing the media and calling for his supporters to vote. Photo by Kevin Dietsch/UPI | License Photo

White House Chief of Staff Mark Meadows listens in the background as Trump’s physician, Dr. Sean Conley, gives an update Sunday on the condition of the president, saying he could be released as early as Monday. Photo by Michael Reynolds/UPI | License Photo

Trump waves from the presidential motorcade upon arriving at Walter Reed on Friday. He also made a “surprise” motorcade visit outside the hospital on Sunday. Photo by Oliver Contreras/UPI | License Photo

The hospital is run by the U.S. Department of Defense. Photo by Oliver Contreras/UPI | License Photo

Trump exits the Marine One helicopter with Meadows on arrival at Walter Reed after the short flight from the White House. Photo by Oliver Contreras/UPI | License Photo

U.S. Secret Service agents wearing protective face masks stand by as Trump departs from the South Lawn of the White House on Marine One for the short flight to Bethesda on Friday. Photo by Sarah Silbiger/UPI | License Photo

Trump boards Marine One for the trip to the hospital. Photo by Sarah Silbiger/UPI | License Photo

Trump, accompanied by staffers, walks from the White House to the helicopter under his own power. Photo by Sarah Silbiger/UPI | License Photo

White House press secretary Kayleigh McEnany walks away from the microphones after talking to members of the media outside the West Wing of the White House on Friday. On Monday, she tested positive for COVID-19. Photo by Oliver Contreras/UPI | License Photo