Without masks and a vaccine, we could reach Herd Immunity from COVID-19, but deaths would skyrocket. We break down the science of it.

The Sioux Falls school board unanimously voted to change the rules for how students and staff should quarantine after exposure to COVID-19.

Previously, those who were identified as close contacts to a person who tested positive for the virus were required to quarantine for 14 days. Now, in some instances, including when all parties involved were wearing masks, students will be allowed to return to the classroom sooner.

The policy changes go into effect Thursday, Superintendent Jane Stavem said. Those currently in quarantine will start receiving notices about how to proceed next, she said.

The new rules include:

If symptoms do develop within the 14-day quarantine period, the student or staff member will be excluded and must isolate at home, the rules state.

The potential change follows what superintendents called mixed messaging from the state about how to handle quarantine.

The state education department clarified a few weeks ago that the ultimate decision of how long students and staff should be quarantined rested in the hands of local school boards. The department also stated that the 14-day quarantine time was not a requirement from the state health department, as initially perceived.

The change also follows data released by Stavem earlier in the week that less than 1% of students and staff had tested positive as of Monday, while more than 5% of students and almost 1.5% of staff were currently in quarantine.

Sioux Falls is the largest district in the state, with more than 25,000 students and more than 3,000 employees.

The decision did not pass without debate though. Nearly a dozen people signed up to speak to board members about the changes ahead of the vote, with only a few speaking against, saying the district was moving too quickly or urging the district to pass a mask mandate along with the changes.

“I didn’t think we would be having this conversation this soon,” said Tim Eckart, the Sioux Falls Education Association president. “We’ve only been in school for about 23 days, and we’ve only had 23 days of data to go through really in order to make this decision. Usually, when we make a decision this big, we take more data and more time. Twenty-three days doesn’t seem quite like enough.”

District spokesperson Carly Uthe said before the meeting mask protocols will remain the same, and that the majority of students and staff are already wearing masks, something that district officials said implemented as an expectation on campuses earlier this year despite protests.

Teachers who spoke out though pushed back against the idea, and said it was too soon to know the impact as cases continue to rise in Sioux Falls and some educators are already at the point of exhaustion. 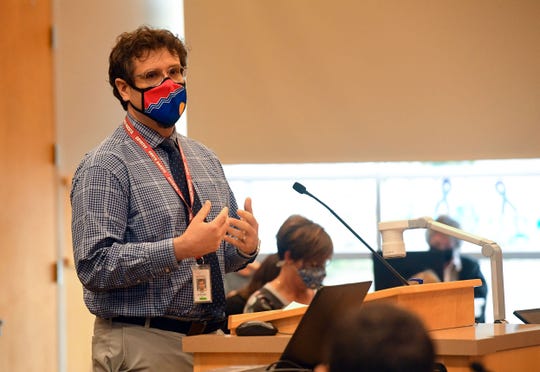 Jennifer Bergan-Gabor, a Roosevelt High teacher, called out Stavem for statements she made Monday that nearly 100% were wearing masks as expected. She said she counted 34 students Wednesday that didn’t wear masks correctly and wondered if that’s something she’ll have to do every day.

“For me to be told 100% of students are wearing masks is an out-and-out lie,” she said.

Parents and teachers in favor of the changes said if healthcare workers who aren’t showing symptoms can return to work after being exposed, then students and staff should be held to the same standard.

Some said the changes would be an incentive for students to continue wearing masks on campuses because students want to be in class, while others argued the previous 14-day requirement favored those who had strong, safe support systems at home and access to resources. 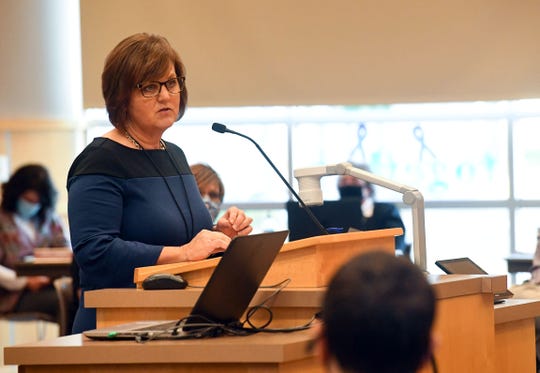 Board members also said before the vote that at this point, the district is winning and that the current number of cases should be seen as a success. They said they feared students are falling behind by missing two weeks of school after coming into contact with someone who tested positive or having to go into quarantine multiple times.

Students are beginning to question what the point of the precautions are if they’re doing everything they should be doing and are still being sent home, some speakers said.

But the change is one piece of many to solve issues with quarantined students, Stavem said. if the changes don’t work, the district and board can always alter the rules again, board members said.

“There is no doubt we feel the strain over time of having school, having life, during a pandemic,” she said. “That can’t be understated.”

A couple board members said their own children had been quarantined at one point since classes resumed, missing assignments and feeling the anxiety from not being able to attend learning in-person.

“Our job is to educate kids,” board member Todd Thoelke said. “We’re failing at that by keeping kids out for 14 days and maybe another 14 days. We’re following some good protocol, but we can always revert back. We can always evaluate this. I just think this is a really good move for our students and our schools.”