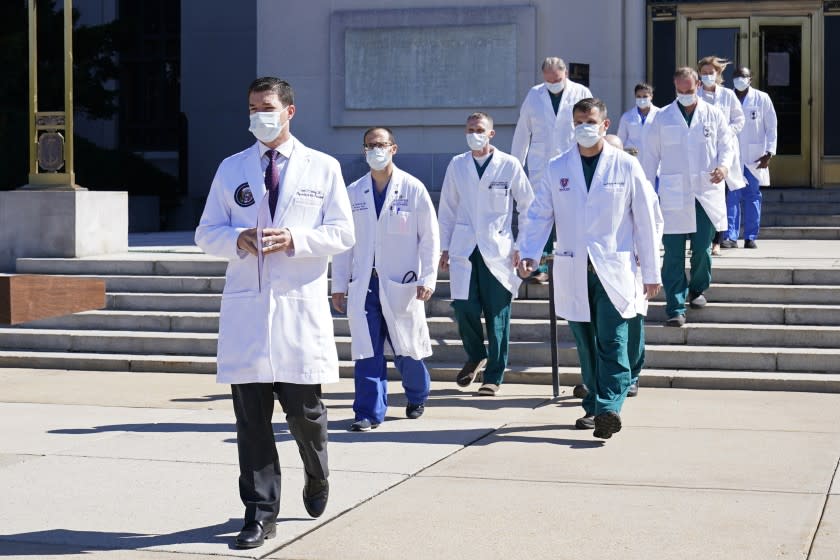 President Trump returned to the White House Monday after just three days of treatment for COVID-19 at the Walter Reed National Military Medical Center, peeling off his face mask dramatically (and dangerously) on arrival to suggest that he had beaten the infection that has killed so many thousands of others and was raring to go back to the critical work of running the country. “Feeling really good!” he tweeted earlier in the day.

That’s good news if it’s true, but color us skeptical.

Let’s be clear up front that we wish Trump a speedy and complete recovery, for his own sake and for the stability of the country. But from the moment last week when the president revealed that he and First Lady Melania Trump had tested positive for the coronavirus, the truth about the still unfolding outbreak of COVID-19 among those who work in or are connected to the White House has been as elusive as Trump’s tax returns.

Simple questions have gone unanswered. Did the president know his campaign advisor Hope Hicks tested positive before he took off for a fundraiser in New Jersey on Thursday? When was Trump’s last negative test? Why isn’t the White House informing people who might have been exposed? How bad was his fever?

We’d like to believe that medical professionals are immune to the type of mendacity practiced with regularity by the Trump administration. But Conley and the team treating the president seem to have been influenced by Trump’s desperate need to be seen as uncommonly hale and hearty, and certainly not as an overweight and at-risk senior citizen. He’s doing great, they exclaimed at one moment; the next they described giving him treatment that one would expect only in a serious COVID-19 case. It was more than a little confusing.

During a Saturday press briefing, Conley came very close to outright lying while evading questions about whether the president had received supplemental oxygen. This matters because it would have been a sign that that the president was having problems breathing and therefore was sicker than anyone was letting on. White House Chief of Staff Mark Meadows revealed later that the president had a fever on Friday and that his blood oxygen had dropped rapidly, prompting his transfer to the hospital.

The next day Conley admitted that — OK, yes — Trump had indeed received oxygen but said by way of explanation, “I didn’t want to give any information that might steer the course of illness in another direction.” Perhaps not, but how can the public trust Conley to give them the straight story now? His allegiance is clearly to the president, not the American public.

Even Conley’s admonition that Trump “may not entirely be out of the woods yet” seems like so much spin. May not?

The reality is that the president is still grappling with a dangerous illness. A return to the White House — where there’s a 24-hour, fully equipped medical unit — does not signal a triumph over this insidious disease. He’s still taking Dexamethasone, a steroid that is typically given only to people with serious cases of COVID-19, and has yet to finish a five-day course of Remdesivir, an antiviral medication. And the fact the president won’t allow doctors to release the result of his chest scan means the public cannot tell whether the infection has damaged his lungs, as the coronavirus has done to others.

The president may be doing better but he is definitely not out of the woods yet — and that’s the kind of thing that the public deserves to know.