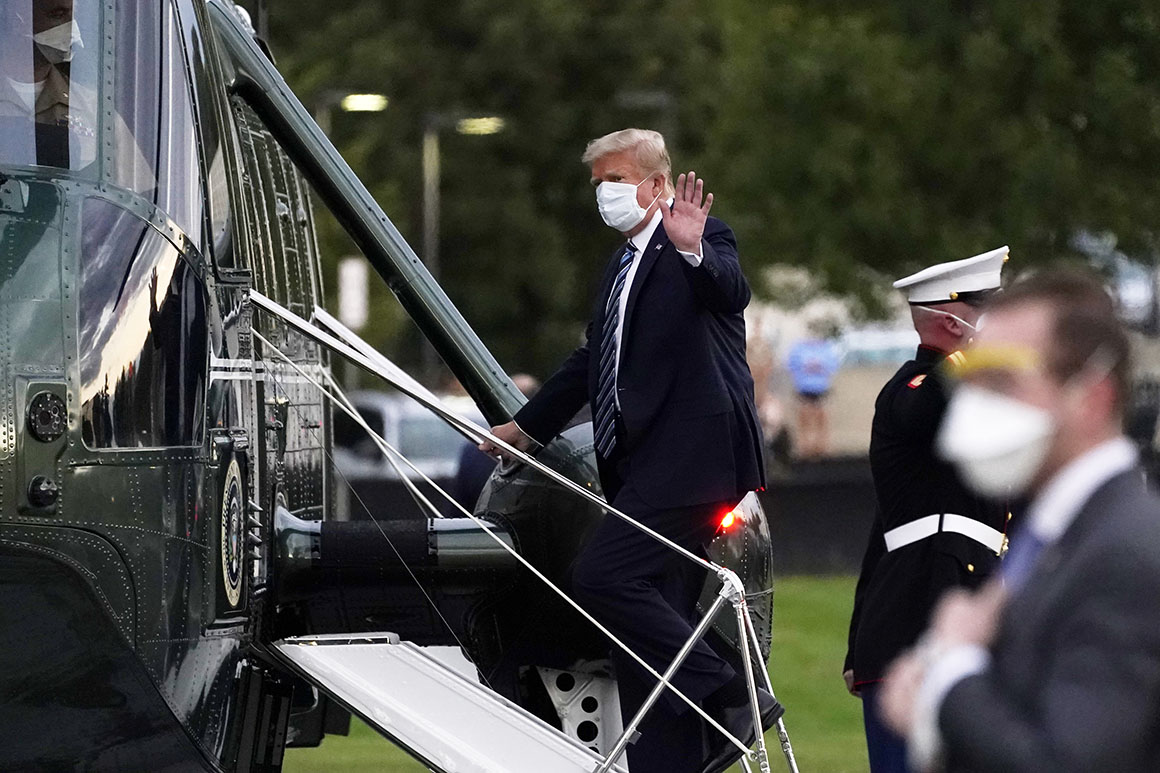 Trump claims his Covid treatment means a cure is imminent

“I wasn’t feeling so hot and within a short period of time they gave me Regeneron,” he said, referring to drug company that makes the experimental antibody cocktail he received. “It was unbelievable. I felt good immediately. I felt as good three days ago as I do now.”

Trump later said of the drug, “I call that a cure,” and suggested that his infection was “a blessing from god” that revealed the drug’s promise. “I think if I didn’t catch [the virus] we’d be looking at that like a bunch of other drugs.”

The president for months has also been promising that a coronavirus vaccine is imminent, often pledging to make it available by Election Day. Late-stage clinical trials are underway, but no vaccine maker has yet sought emergency authorization or approval from the Food and Drug Administration. On Tuesday, the FDA released stricter new vaccine guidelines that make it unlikely a shot will arrive by Nov. 3.

Now Trump is promoting the experimental antibody drugs as cures, with his most effusive praise reserved for the drug made by Regeneron. The company CEO is a member of Trump’s Westchester, N.Y., golf club.

Trump said in the video that his administration would authorize emergency use of Regeneron’s treatment, and a similar antibody drug from Eli Lilly, and would soon make them available to the public. Lilly has said that it is seeking emergency authorization from the Food and Drug Administration, while Regeneron has revealed that it’s in talks with the agency.

“If you’re in the hospital and feeling really bad, I think we’re going to work it so that you get them and you’re going to get them free,” Trump said, adding that the government had “hundreds of thousands of doses that were nearly available.”

The two antibody treatments are now being tested in clinical trials, and scientists have greeted the limited early data released as promising. But the drugs are far from a slam-dunk. Regeneron and Lilly have said that their antibodies help Covid-19 patients clear the coronavirus from their bodies, and appear to speed recovery. But it is not clear whether the drugs reduce the risk of death.

And Trump has taken several other medications since his diagnosis, including the steroid dexamethasone and the antiviral drug remdesivir. That combination is not available to the typical patient — and the typical patient doesn’t get treated in the presidential quarters of Walter Reed hospital.

The federal government’s coronavirus drug and vaccine accelerator, Operation Warp Speed, has spent $450 million to secure up to 300,000 doses of Regeneron’s antibody treatment, which it will make available to U.S. patients at no cost. Lilly has said that it could have up to 1 million doses of its antibody treatment available by the end of the year, including 100,000 by October. But Warp Speed has not said whether it has purchased any of the Lilly drug.

Trump told his doctor he feels “great!” His physician released a flimsy update on his health, while the president spread dubious information about the coronavirus — a virus that has infected more than 7.4 million Americans and killed nearly 210,000.