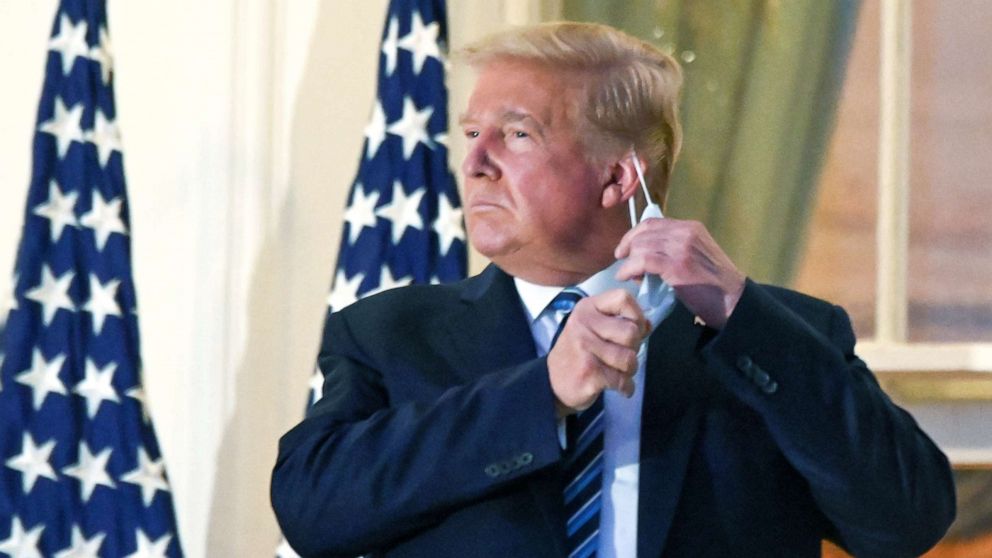 Trump falsely dismisses virus danger: ‘You catch it, you get better, and you’re immune’

President Donald Trump on Thursday, just days after being hospitalized for COVID-19 and as he continued to receive medical care at the White House, once again downplayed his own sickness and the threat to Americans across the country.

“Remember, when you catch it, you get better, and you’re immune,” he told Fox Business anchor Maria Bartiromo in his first extensive interview since getting out of Walter Reed hospital Monday and with Election Day now just weeks away.

The president’s continued effort to minimize the danger comes as more than 211,000 American lives have died from the virus that continues to spread in many parts of the U.S., including inside the White House and within the ranks of his own administration.

Even as he touted the Regeneron antibody treatment he’s taken as a “cure,” without evidence, he portrayed his hospitalization as having been unnecessary and suggested he could have “would have done it fine without drugs.”

“I didn’t have to go in frankly, I think it would have gone away by itself,” Trump said.

The president’s confidence in his condition comes after he was twice administered oxygen in recent days as he has fought the virus and seemed to confirm he is still being treated with a steroid, even as he said he is off all other medications.

The White House and the president’s doctors have refused to answer basic questions about Trump’s illness and treatments, such as when he last tested negative for COVID-19 before he received a positive test and what impact the virus has had on his lungs.

“I will be tested very soon, but I am essentially very clean, they say it’s over a period of six, seven days, and I was — you know amazing thing happened to me I just went in, I didn’t feel good. And that’s OK, I expected that at some point,” Trump said, likening the virus to a “microscopic piece of dust.”

Despite not having been tested, the president said he doesn’t think he is contagious “at all anymore” and said he is feeling so well that he would like to do a rally tonight and felt he could have done one last night.

The president said whether or not he is contagious, if he were at a rally “I stand by myself very far away from everybody.” But the president then added he “still wouldn’t go” to a rally if he were.

The White House has not said when Trump received his last negative test prior to his diagnosis with the virus on Thursday, but a USA Today investigation found that the president and his team of aides potentially exposed thousands of people to the virus in their extensive travels in the days leading up to the president’s diagnosis.

“You know 99.9% below a very substantial age, has no problem. I mean, they can get it feel a little sick but they don’t die,” Trump told Bartiromo, falsely suggesting that the virus only poses a threat to the nation’s elderly.

While it is true that older people and those with underlying health conditions are at greatest risk of contracting a serious illness from the virus, the president’s comments ignore the cases of serious illness and death among younger Americans and the potential for those people to spread the disease to more at-risk individuals.

The president credited his own quick recovery to his treatment to the unproven antibody therapy developed by drugmaker Regeneron: “I don’t know what would with happen without Regeneron, all I know I had it I was better within 24 hours, I felt perfect.”

The treatment has not been authorized by the Food and Drug Administration and has been administered for compassionate use only for fewer than 10 other people in the world outside of clinical trials.

But now, Trump said, he wants to make it available, at no cost, to the “tiny percentage of senior citizens and all.”

“What I’m going to do is take Regeneron, and take the Eli Lilly equivalent, they’re a little different, you know, both great, but very similar,” he said. “I’m going to send them free of charge to all the hospitals.”

It’s unclear how the president would execute on his stated plan to distribute the drug broadly and for free.

The president said he will be giving the drugmaker an emergency use authorization but that authorization must come with the scientific approval from the Food and Drug Administration.