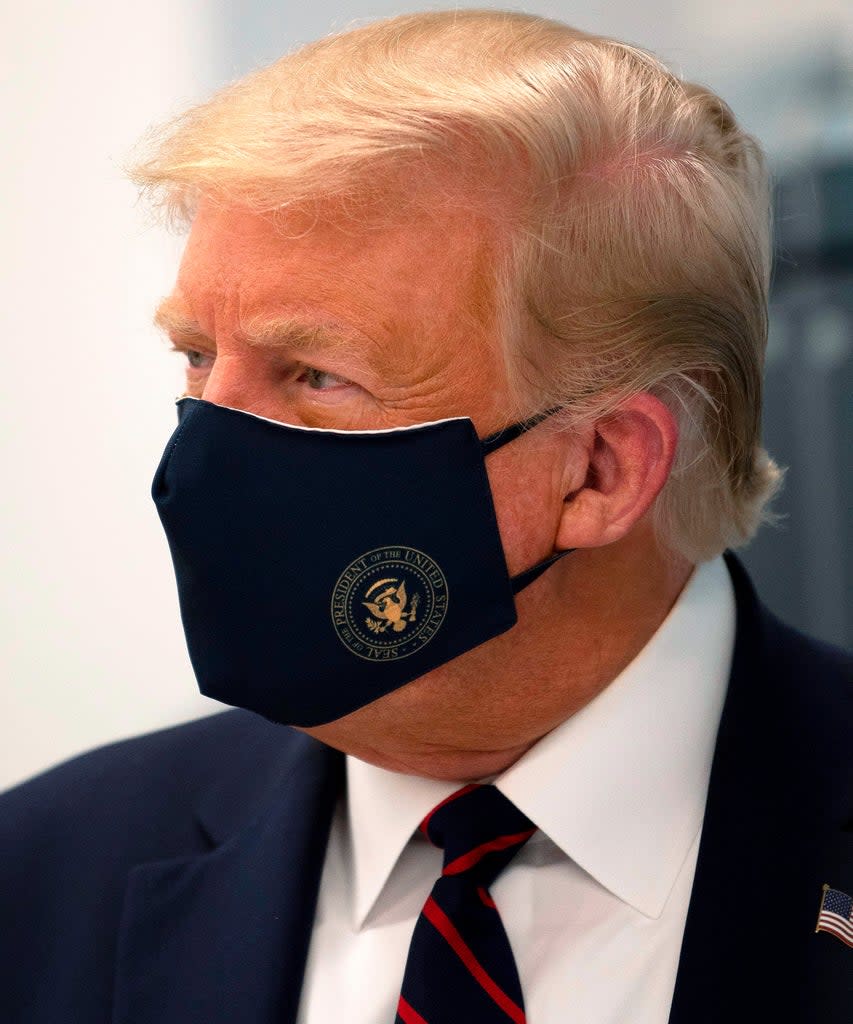 Trump Has A “Mild” Case Of COVID-19. What Does It Mean For His Health?

By now, you know: President Trump tested positive for COVID-19, news he announced on Twitter, after his advisor and senior counselor Hope Hicks tested positive. Trump and First Lady Melania Trump, who also tested positive, entered their quarantine late Thursday night. On Friday afternoon, the president made a visit to the Walter Reed National Military Medical Center in Bethesda, MD, according to NPR.

“President Trump remains in good spirts, has mild symptoms, and has been working throughout the day,” White House Press Secretary Kayleigh McEnany said. “Out of an abundance of caution, and at the recommendation of his physician and medical experts, the President will be working from the presidential offices at Walter Reed for the next few days. President Trump appreciates the outpouring of support for both he and the First Lady.” The First Lady tweeted that she’s experiencing mild symptoms as well.

Despite the fact that we’re over six months into the pandemic, there are still some question marks around COVID-19 symptoms, including who gets them, what they feel like, and how long they take to appear. This is what we know so far — and what it might mean for the president.

What COVID symptoms does Donald Trump have?

As of right now, Trump appears to have cold-like symptoms that include coughing and a fever, Vanity Fair has reported. Initially, there was a rumor that Trump was asymptomatic; Ronny Jackson, MD, the former White House physician said as much to Fox News. But soon after, news surfaced of sources alleging that the president appeared “lethargic” and a fundraiser in Bedminster, NJ, reports The New York Times. Another insider told the outlet that Trump “fell asleep at one point on Air Force One on the way back from a rally in Minnesota on Wednesday night.”

According to a press briefing with Mark Meadows, the White House chief of staff, it has been confirmed that the president is showing mild, cold-like symptoms. Melania Trump tweeted that she also has mild symptoms, but is feeling good overall.

What are mild COVID-19 symptoms?

According to the CDC, the symptoms for COVID-19 include: fever or chills, cough, shortness of breath or difficulty breathing, fatigue, muscle or body aches, headaches, loss of taste or smell, a sore throat, congestion or runny nose, nausea or vomiting, and diarrhea. While Trump has only been reported having a cough and fever, it’s possible that he could be experiencing some of the symptoms mentioned.

While Trump is currently residing at the hospital, if you have mild symptoms of COVID-19 call your doctor and follow their direction rather than heading straight in. The CDC gives a list of symptoms that indicate you need emergency medical attention.

“Your best chances of not giving your disease to your doctor or other patients is to stay home,” Jill Lauren, MD, a board-certified emergency medicine doctor and attending physician at Palo Alto Medical Foundation Urgent Care in Santa Cruz, California, previously told Refinery29.

Yes, you can have just mild symptoms, like the president and first lady, and still pass COVID-19 to other people. You can even pass it to others while totally asymptomatic. “People who have more pronounced symptoms may have a higher viral load so they could spread it. But people can still spread it when they’re asymptomatic, so it’s hard to say,” Dr. Sovndal says.

This is why frequent testing is important, especially if you’ve been in high-risk situations like crowds or you’ve been traveling. The scary thing about those who are asymptomatic or have mild symptoms may not think to quarantine, since they feel largely fine. Instead they’re out and about exposing themselves to others, possibly infecting people. Trump, for example, has been very active for the past seven days.

It’s hard to say. There’s still a lot we don’t know about COVID-19. Anecdotally, we’ve heard of situations going either way — there’s a possibility symptoms could get worse, and a possibility things could get better.

Will Donald Trump have to quarantine?

Like doctors and the CDC have been saying, those who have been exposed or diagnosed with COVID-19 should be quarantining for at least 14 days after they test positive or as long as symptoms are showing. Both the president and the First Lady have revealed that they’ve begun to quarantine themselves on Thursday night, after they learned they’d been exposed.

“The protocol is that they should be in isolation,” Dr. Sovndal says. “It’s not just based on when you have a positive test. He’ll be in isolation for an unknown amount of time because we don’t know what way his symptoms are going to go.” As with any virus, if you’re still fighting that virus you can still have viral particles that are replicating. And as long as there’s a potential for that happening, you should be in isolation, he adds.

From what we know about Trump, he does have a few risk factors. The first is his age. From the available research, it seems like older people are more likely to develop severe symptoms than younger people. Trump is currently 74 years old, which means he’s at a higher risk than those who are in their 50s and 60s. According to the CDC, for every 100,000 cases in 65-74 year olds, 198.7 were hospitalized. Eight out of 10 COVID-19-related deaths reported in the United States were among adults aged 65 years and older, as well.

Aside from age, Trump also allegedly has a common form of heart disease called coronary artery disease, CNN reported back in 2018. The New York Times also reported in 2018 that Trump likely has or could develop coronary artery disease, according to results from his physical exam. The CDC says that this condition will also increase your risk of severe illness from COVID-19.

Like what you see? How about some more R29 goodness, right here?

What Trump Did The Days Before He Tested Positive