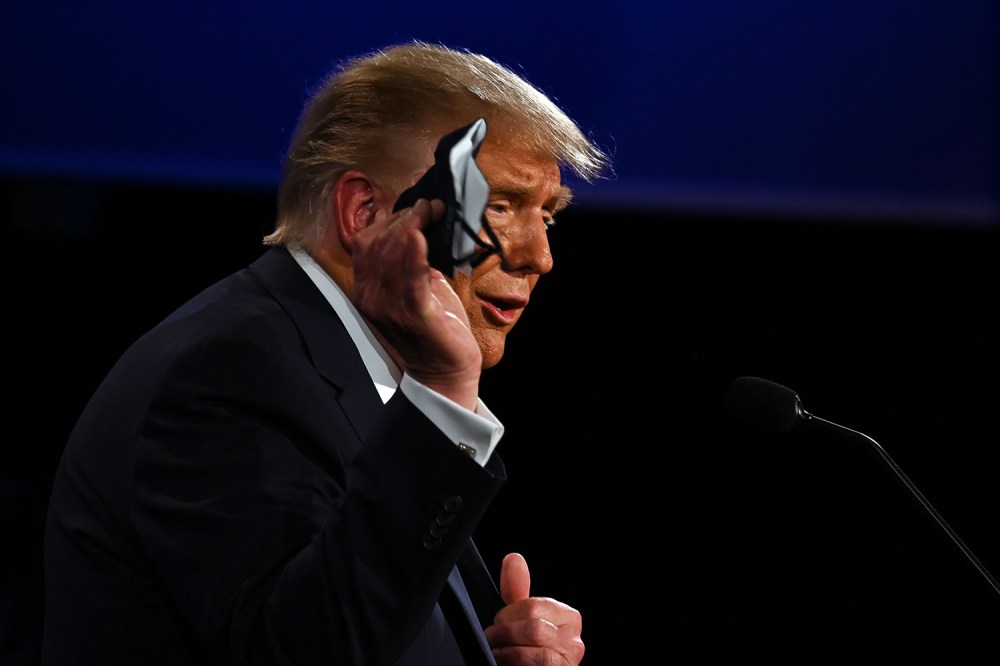 Trump Has Treatment Options for Coronavirus. None of Them Are Good.

President Donald Trump and first lady Melania Trump are infected with the SARS-CoV-2 virus that causes the dangerous disease COVID-19. Some of the president’s staff and individuals he has met recently have also tested positive for the virus, and results on a long list of White House and campaign staff are pending. Trump was taken to Walter Reed Military Medical Center Friday afternoon, where he will remain, White House officials say, for a few days. But what awaits him—and the country he still leads—as he deals with this virus?

Despite his 74 years and overweight frame, Trump has always tried to portray himself as vigorous, healthy, and even athletic. While depicting his thinner 77-year-old opponent Joe Biden as doddering, slow, and senile, Trump has tried to give the impression that he is Biden’s junior by far, more than the three chronological years that separate them.

He has similarly, and repeatedly, depicted the COVID-19 risk as somebody else’s problem. Older people with heart conditions might have to be concerned—certainly not Trump.

On Sept. 21, Trump looked out over a mostly mask-free crowd in Swanton, Ohio, and beamed, “Wow, this is a big crowd. This is a big crowd.” The crowd roared. And Trump brushed off concern about masks and COVID-19, saying: “It affects elderly people. Elderly people with heart problems. If they have other problems, that’s what it really affects. That’s it. … But it affects virtually nobody. It’s an amazing thing.”

The federal government defines “seniors and elderly,” for most medical, retirement, and tax purposes, as individuals over 65 years of age, which clearly puts Trump in the category he dismissed in Swanton as “virtually nobody.” Does he suffer from any underlying conditions, other than his weight, that may put him at additional risk? We don’t really know, because in his constant struggle to appear youthful, covering up his thinning hair and playing record-breaking hours of presidential golf, Trump has made sure that no genuine medical work-up reaches the public.

His Manhattan physician, Harold Bornstein—a wild-haired, colorful figure who looks more like a hippie than a board-certified gastroenterologist—in August 2016 certified, “His health is excellent, especially his mental health.” And in a December 2015 statement he said was dictated to him by a Trump aide and written hastily while a limousine waited outside, he wrote that then-candidate Trump’s physical strength and stamina were “extraordinary.”

Former White House physician Ronny Jackson, who is now the Republican Party’s candidate for the 13th Congressional District in Texas, has benefited tremendously since coming to the president’s attention in 2017. White House staff and Trump campaign officials have raised funds for his shot at a congressional seat and advised his campaign. Back in January 2018, Jackson, then a U.S. Navy rear admiral, conducted the first and only official medical examination of the president at Walter Reed National Military Medical Center. In a press conference following Trump’s checkup, Jackson said his patient had “incredible genes,” performed beautifully on a cognitive test, “and claimed that if he had adhered to a better diet over the past 20 years, he could have lived to be 200,” according to the New York Times. Shortly after that, Trump nominated Jackson to head the Department of Veterans Affairs—a move that was foiled by allegations that the Navy doctor had handed out medicines to officers without medical indications.

Over the years, Trump and his staff have let slip tidbits of his real health status. He reportedly takes Propecia to fight hair loss, daily aspirin to prevent heart attacks, the cholesterol-lowering statin Crestor, and regular doses of the antibiotic tetracycline to deal with the colorful rosacea blotches that occasionally appear on his cheeks. According to the White House physician’s office, Trump is also taking supplements of zinc, vitamin D, melatonin to combat insomnia, and the histamine-blocker famotidine. None of this is particularly remarkable for an older, overweight American man—except that Trump goes to great lengths to not be labeled as such.

This year, concerns have been raised about incidents of Trump’s slurred speech and apparent trouble walking. In June, the president had obvious difficulty descending a ramp following a speech to West Point cadets. During the speech, he struggled to hold and drink from a glass of water. In a June 14 tweet, Trump said the ramp was “very slippery,” and in a subsequent speech, with much fanfare, he showed a cheering crowd that he was able to hold a glass of water with one hand.

Eleven months ago (Nov 2019) President Trump made a surprise, unscheduled visit to Walter Reed’s hospital, where he remained for two days. Trump’s doctor, Sean Conley, declined to reveal the reason for the two-day medical visit, though he pointedly dismissed the President underwent tests for cardiac or neurologic conditions.

In November 2019, an anonymous alleged White House staffer wrote in a book titled A Warning: “I am not qualified to diagnose the president’s mental acuity. All I can tell you is that normal people who spend any time with Donald Trump are uncomfortable by what they witness. He stumbles, slurs, gets confused, is easily irritated, and has trouble synthesizing information, not occasionally but with regularity. Those who would claim otherwise are lying to themselves or to the country.”

Combined, these pieces of evidence suggest that Trump may have some of the underlying health conditions that put COVID-19 patients at risk for severe outcomes.

If current reports are accurate and the president has already displayed symptoms of fatigue and breathing difficulties, he may soon become too ill to do his job, as was the case with British Prime Minister Boris Johnson. As one of my friends put it while she struggled at home with the virus, “It feels like an elephant is sitting on my chest.” In the coming days, the severity of Trump’s illness will become more apparent, including whether—like Johnson—he requires hospitalization and respiratory support.

More worrying, from the point of view of Trump’s role as commander in chief, is increasing evidence that SARS-CoV-2 can infect the brain and cause cognitive dysfunctions, including hallucinations, severe headaches, dizziness, and impaired judgment. The list of neurological symptoms connected with COVID-19 is very long, including confusion, delirium, senility, and permanent brain damage. These, and other brain-associated symptoms, may persist for months.

Assuming the president is willing to undergo state-of-the-art treatment—forgoing the hydroxychloroquine, forsythia, bleach, and other alleged treatments he has in the past espoused—he may ask Anthony Fauci and his staff at the National Institute of Allergy and Infectious Diseases to consult on his case. Based on the latest scientific findings, they might urge a blood test to determine whether Trump is part of a genetic minority—14 percent of severe COVID-19 cases—whose DNA programs antibodies that attack type I interferons, molecules now known to be crucial to the body’s ability to fight off the virus.

According to the White House, the President was transported to Walter Reed Friday afternoon, and underwent an infusion treatment with monoclonal antibodies, made by Regeneron – a targeted immunological treatment that has not yet been approved by the FDA.

If he wishes to take advantage of the U.S. Food and Drug Administration’s emergency use authorization for convalescent plasma therapy, receiving possibly beneficial blood products from COVID-19 survivors, he should start that treatment immediately, as clinical evidence points to whatever benefits it may provide as occurring in the earliest stages of the disease. Given his alleged cholesterol issues and the possibility that slurred speech and walking/balance issues are related to an underlying heart condition, Trump’s physicians should pay close attention to his cardiac performance. There is increasing evidence that SARS-CoV-2 directly attacks and destroys heart muscle cells and causes longer-term heart problems and blood clotting throughout the body, even in people who had apparently asymptomatic infections. Another controversial treatment, the Ebola drug remdesivir, may help stave off severe outcomes—but like plasma therapy, its benefits are greatest if taken immediately. Physicians in the United Kingdom routinely now give a cheap steroid, dexamethasone, to COVID-19 patients to control dangerous overreactions against the virus on the part of patients’ immune systems. And, of course, Fauci or any other qualified physician would advise the president to get more sleep than usual and remain in bed.

Given the great lengths Trump has gone to appear younger than his true 74 years and hide his medical history from public scrutiny, it is difficult to predict how his body will manage the virus. From a public health point of view, he clearly must remain in strict quarantine for a minimum of two weeks after he is symptom-free, in order to protect others from his contagion. Medically, he may prove that, as he said months ago, “it’s just like the flu,” recovering in a few days. But given what is known about his health, weight, and age, Trump may face a tough battle with the coronavirus.

At a minimum, both for his personal health and the safety of others, Trump can no longer hold mass campaign rallies. The scheduled Oct. 15 debate against Biden, planned for Miami, should be canceled. The Oct. 22 Nashville debate may also need to be reconsidered, possibly moved to a virtual format. Vice President Mike Pence’s schedule should be reassessed, keeping him close to the White House, where, should the president’s condition worsen significantly, he may be called on to assume Oval Office duties.

Someone introduced the virus into the White House circle, possibly exhibiting a failure to quarantine, wear masks and practice social distancing. It’s worth noting that in addition to the President and First Lady, four people who attended the small, mostly mask-free September 26 ceremony in the White House Rose Garden have tested positive. All were seated in the front three rows at the gathering, during which Judge Amy Coney Barrett was formally nominated to serve on the U.S. Supreme Court. In addition, three reporters who covered the event today tested positive, bringing the total to nine people, linked to a small, tightly-knit assemblage.

While many commentators and internet afficionados have greeted news of the president and first lady’s illness with sarcasm and smirks about Trump shunning masks and downplaying the COVID-19 crisis, this disease has created a time of reckoning for the nation. There is nothing amusing or sarcasm-inviting about an ailing president of the United States, especially when he is a man of high-risk health facing a viral enemy as serious as SARS-CoV-2.