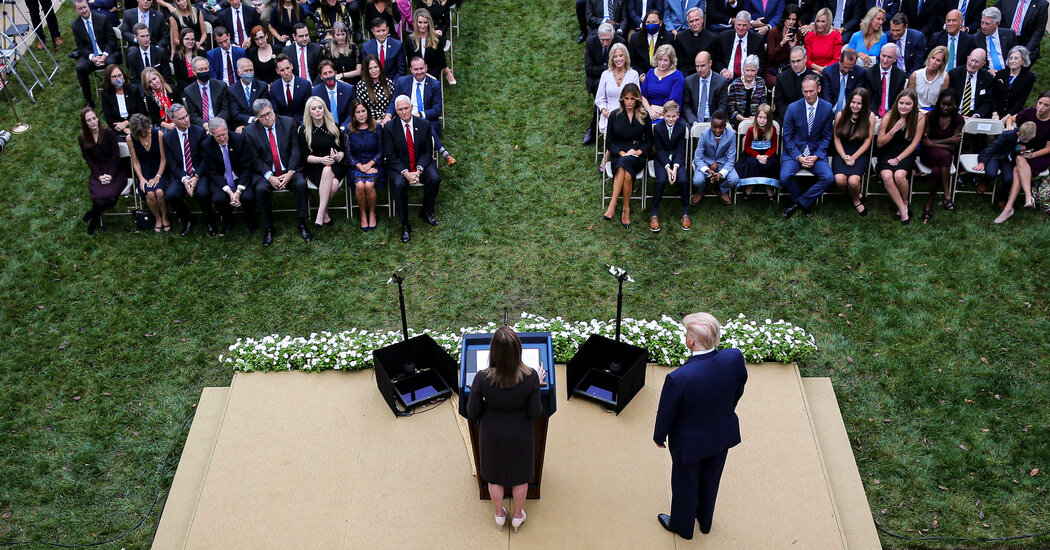 “The list is names and email addresses. For robust contact tracing you need city and state,” one official said. “We basically say as much — we want and need more information.”

The officials said the state contacted the White House early Friday after learning of the president’s diagnosis and was told in a “blanket statement” that the “White House Medical Unit is doing all the contact tracing.”

“That doesn’t really satisfy us — particularly with the New Jerseyans,” the official said.

Mr. Deere, the White House spokesman, said: “A full contact tracing, consistent with C.D.C. guidelines, was completed for the Bedminster, N.J. trip. The President did not have any interactions with Bedminster staff or guests that would be considered to be ‘close’ based on CDC guidelines (more than 15 minutes and within 6 feet).”

He added, “All White House staff considered to be in close contact during this trip have been identified, contacted, and recommended to quarantine.”

At the event for Judge Barrett, guests, few of them wearing masks, mingled both outdoors and indoors, hugging and talking with heads close together. Over the next several days, at least eight attendees, including two senators, tested positive. On Monday, the White House press secretary, Kayleigh McEnany, became the latest.

The timing of the diagnosis of Mr. Trump’s illness makes it highly likely that he and the others became infected on Saturday, medical experts said. Symptoms typically appear around five days after exposure to the virus; Mr. Trump began showing symptoms on Thursday, “right smack dab in the day” he would be expected to, Dr. Maldonado said.

An outbreak investigation would help identify the source of the infections, said Dr. Thomas R. Frieden, who led the C.D.C. under President Barack Obama.